Scotland’s college workers are inching closer to the first national strike for 20 years. Anger at government cuts and a miserly national pay offer have fuelled a mood to fight.

Members of the EIS Fela college lecturers’ union were set to meet at a special conference in Glasgow on Friday of this week.

They will debate strategy in their pay fight.

And the Unison union is recommending college support staff reject employers’ latest offer in a ballot ahead of pay talks on 19 November.

The current offer is far short of workers’ demands.

The SNP has tried to disguise its cuts through a programme of college mergers.

The mergers brought Scotland’s colleges back into the public sector and returned pay negotiations to national bargaining.

The current dispute is the first of those negotiations.

Workers are furious that, at a time of cuts, bosses squirrelled away college cash and trousered hefty payoffs for themselves.

Severance payments for those at the top have been so outrageous that MSPs are now scrutinising the details. One such example is Coatbridge College, now part of New College Lanarkshire.

Senior staff at Coatbridge are accused of collusion in handing £849,842 to former principal John Doyle, a member of his staff and five senior managers.

One EIS Fela member who worked at Coatbridge College called the payoffs “looting”.

They said, “These managers gave themselves plush offices, grand titles and obscene salaries.

“They introduced competition between colleges and sacked those who stood in their way.

“Back in the real world staff are being asked to accept the inequality of £7,000 difference in pay for doing the same job.

“And they insult us with a 1 percent pay rise, almost a year late. I’ll be rejecting their lousy offer and arguing for sustained strikes.”

The EIS has also exposed that tens of millions of pounds of cash reserves were transferred to arm’s length private trusts by college bosses over the past few years.

The employers have pleaded poverty and dragged pay negotiations out for far too long. 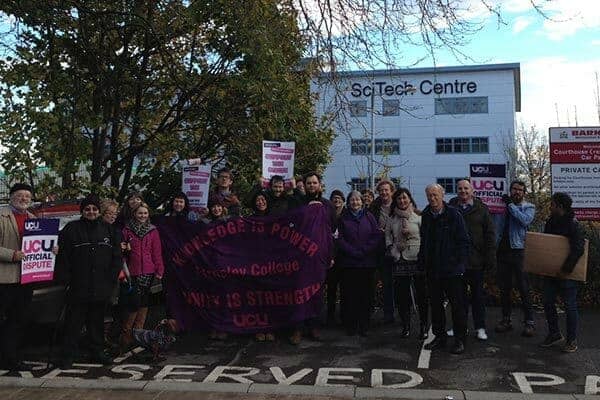