Around 2,000 anti racists and anti fascists united in Edinburgh on Saturday, 20 February, to stop the Scottish Defence League (SDL) from marching.

“They did not pass”, Luke Henderson proudly told Socialist Worker, as the last SDL member was forced onto a bus to chants and shouts from hundreds of protesters.

Eileen Boyle was part of the Unite Against Fascism (UAF) group who came from Glasgow to oppose the SDL. “They were holed up inside a pub at the bottom of the Royal Mile”, she said. “We surrounded the pub–it was brilliant that they didn’t get to march.”

Protesters taunted SDL members chanting, “If it wasn’t for the police you’d be minced.”

People gathered from early in the morning, determined to stop the SDL from marching. Students at Edinburgh University assembled with home made banners and placards and marched down to join the main demonstration. One banner read, Scotland is like a haggis–a bit of everything.

The SDL arrived on trains and gathered in pubs–but everywhere they went they were met with protesters. “They couldn’t assemble in one place”, said Luke, “it was a real humiliation for them.”

People from across Edinburgh joined the protest–from the LGBT community, religious groups, universities and colleges.

Demonstrators gathered in the city centre, determined to occupy the streets. They marched to the Edinburgh central mosque in solidarity with the Muslim community. Many people came out of the mosque to join them.

One protester tells of how a member of staff at a local coffee shop smiled and said “no pasaran” (they shall not pass), as he gave away free coffee.

Philip Neal, a student on the march, was part of the group of protesters who surrounded the pub the SDL were holed up in. “First we marched through the city to show that we are the majority”, he told Socialist Worker. “Then around 200 of us went to confront the Nazis–to make sure they didn’t get to march.”

Weyman Bennett, chair of UAF, said, “Today marks a turning point. The EDL and their sister organisations in Scotland and Wales said they could march anywhere. Well, today, we showed them that they can’t.”

The EDL is planning to come to Bolton on the 20 March. “We will organise even larger numbers to come to Bolton to drive them off the streets”, he told Socialist Worker, “anti fascists are the vast majority in society, the EDL’s time of rioting through our streets is over.”

Protesters gathered for a rally organised by UAF and Scotland United (SU). 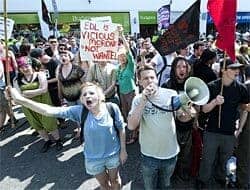