Scottish Power: ‘We fight back – they back down’

This article is over 15 years, 11 months old
Scottish Power workers have won a very important battle over pensions – and shown how union organisation and the threat of strikes can overturn the settled will of a multinational firm.
By Willie Black, Scottish Power Amicus senior steward (pc)
Downloading PDF. Please wait...
Saturday 25 February 2006

Scottish Power workers have won a very important battle over pensions – and shown how union organisation and the threat of strikes can overturn the settled will of a multinational firm.

Our battle was not just for ourselves and our pensions, but for future generations of workers.

At the start of this year management told us that it intended that every worker should pay 2 percent more of their salary in pension contributions.

In addition, new starters would face an increase in their pension age from 63 to 65, and the replacement of a final salary scheme with an inferior money purchase scheme.

In total the package was designed to extract some £150 million from the workforce to put into the pension scheme.

Coming from a hugely profitable firm, these proposals caused outrage. But there wasn’t just anger – there was organisation and resistance as well.

My union called a stewards meeting which saw 100 people come together and decide to begin the process for a strike ballot. There were similar moves in the other unions at Scottish Power, Prospect and Unison.

It’s amazing how a fightback changes the situation. Management called in our union officials and revealed that their plans had only been tentative proposals!

New workers will start on a money purchase scheme, but after ten years can transfer to the final salary scheme. The 1,400 people who are presently not in the scheme will be offered the chance to enter it.

The company has guaranteed that there will be no further changes to pensions and benefits for current employees for a six year period.

This is a great achievement given the attacks on pensions which are taking place everywhere. It should encourage others to fight and not meekly give in to what management demands.

This is one of very few cases where a final salary scheme has been protected not only for the current workforce but for future ones as well. The union movement should be telling workers everywhere about this victory.

When the company first came for us there were some at the top of the unions who believed the best we could get was to change a few details, but essentially give in. Organisation from below stopped that.

That organisation will also now be strengthened by the creation of a national Scottish Power stewards’ committee as a result of this dispute. 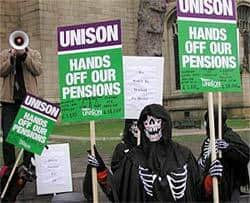 All out to win pensions ballot