As party convenor Colin Fox acknowledged in his opening address, despite a good campaign and an excellent candidate in former Labour Party MSP John McAllion, the SSP vote in Dunfermline had been disappointing.

Colin identified a central task for SSP members in the run-up to the 2007 Scottish parliament elections as being to win back the trust and support of the 130,000 voters who returned six SSP MSPs in 2003.

The opportunities for building that support emerged in debate after debate. On the issue of opposition to war in Iraq, a motion moved by Rose Gentle of Military Families Against the War was carried unanimously. The conference re-committed the SSP to making opposition to war one of the party’s central priorities and urged support for the 18 March demonstration in London.

On climate change, delegates voted to campaign for energy policies which invest in renewable forms of energy and to affiliate to the Campaign against Climate Change.

In an excellent debate on pensions, motions were carried committing the party to building support for industrial action against attacks on our pensions and to opposing the emergence of a two-tier workforce with new or young workers forced to work longer than the existing workforce.

Well-informed debates also took place around crime and drugs, with delegates rejecting mandatory sentences for those found carrying knives and supporting the proposal from MSP Rosemary Byrne for a statutory right to treatment for people with drug problems. Conference also voted to affiliate to Unite Against Fascism after a debate which included a powerful intervention by PCS union president Janice Godrich in favour of affiliation.

The conference passed policy of working with Stop the War, the Muslim Association of Britain and other groups to combat the growing racism against Muslims.

The highlight of the past year for socialists in Scotland was undoubtedly the demonstrations against the G8 at Gleneagles in July 2005, where we worked with other activists to build huge opposition to Bush and Blair.

It was that model of working alongside others, rather than cutting ourselves off from other people and retreating into the bunker of “pure socialism”, which a majority of delegates supported in the debates.

It is also that model which offers the best hope of the SSP offering a real alternative to the neo-liberalism of the other main Scottish parties in the 2007 election. 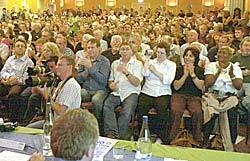 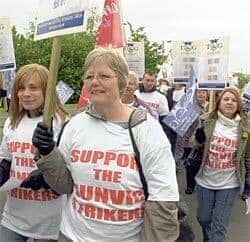 Support growing across Scotland for Sunvic workers on all-out strike