This article is over 16 years, 9 months old
Mark Serwotka, general secretary of the PCS civil service union, spoke to Socialist Worker about the ongoing threat to public sector pensions, job cuts and the relations between the trade unions and Labour
Downloading PDF. Please wait...
Saturday 17 September 2005

“The government was forced to retreat on raising the pension age by the threat of united industrial action in March of this year.

“It’s quite clear from the ­negotiations that have taken place since that it feels it has to offer some concessions.

“My own judgement is that the government genuinely thinks that united industrial action is a possibility.

“PCS has worked tirelessly to ensure that could happen. Our motion to the TUC laid out a detailed approach to how such action could be delivered.

“So the discussions with ministers have been tentatively exploring what concessions could be made.

“I think the government is weighing up how much to concede, what to concede and when.

“Unity has got us where we are now. The government is going to have to move massively to make the outcome of talks acceptable to our members, and we’ve not seen anything like that yet.

The government has just accelerated its assault on the firefighters’ pensions. It is pressing ahead with attacks at the same time as looking for concessions.

“Local government also appears to be in a slightly contradictory position where the John Prescott discussions appear to have a life of their own with the local government unions,” says Mark.

“I think there will be some limited concessions — what form they take and to who they are made remains to be seen.

“But as ever those concessions will involve an element of divide and rule and we cannot allow people to split off.

“The kinds of initiatives which earlier this year brought activists together across unions are essential now. I’ve done a number of those meetings and have been fantastically enthused by seeing rank and file activists and members coming together.

“Our motion to the TUC calls for town and regional cross ­union meetings to organise the campaign. We should not have a bureaucratic blueprint for how this is done.

“If the trades council do it, great, if you do it through setting up a public sector alliance, great.

“We want activists coming together from different public sector unions throughout the UK to make plans. They are the people who will deliver action and the sooner they get together the better.”

Looming over the issue of public sector pensions is the whole relationship between the unions and the government.

“All the evidence I see with my own eyes shows that rank and file members and shop stewards believe we have to exert immense pressure on the government—over employment rights, the anti-union laws, pensions, pay, job cuts and other issues,” says Mark.

“For many of them the Warwick agreement made with the big four affiliated unions last year sounded good, but they have seen no fruits from it.

“The Labour-affiliated unions, it seems to me, have a very testing debate ahead of them. They clearly value affiliation, yet many of their members feel they are being attacked by the government.

“In the PCS we don’t have that complication. We went into the general election, for example, with the opposite approach of quietly hoping for Labour.

“We made it clear that it was a Labour government that was attacking us — over 100,000 job cuts, threats to pensions, poverty rates of pay and so on.

“The unity around the pensions issue is a blueprint for the kind of wider unity we need to see. If we can do it around pensions, why can’t we do it around privatisation and the anti-union laws?”

That kind of approach has meant that the PCS is one of the unions that is growing strongly.

“Our young members’ networks are taking off across the country,” says Mark. “They are very vibrant and active. A lot of young people in our union have become involved because they see the union ­doing things.

“When they see the union at the Edinburgh protests to make poverty history, they think it’s great. When they see us trying to build an active, ­campaigning union that they can have a big role in, they think that’s great too.

“I accept that that is not the universal picture across the trade union movement.

“I personally understand why some young people who are radical over a number of issues look at their unions and feel that they are propping up the Labour government. That poses questions—legitimate questions that need to be addressed.”

Mark says, “The action we took last year—only a one day strike, but very significant—has been able to force some limited concessions.

“We’ve been able to avoid compulsory redundancies. Some departments, such as the Child Support Agency, which was due to lose 4,000 jobs, are actually recruiting.

“On the other hand we are seeing the cuts begin to bite in the provision of public services and they are making people’s working conditions intolerable.

“In the Department for Work and Pensions we are balloting 10,000 members in London for discontinuous strike action.

“The working conditions in the department are appalling. There has been an increase in violent assaults in Jobcentres of 62 percent over the past two years.

“As the public has seen staffing levels cut, local offices close, and increasing use of call centres, the frustration boils over.

“In the Ministry of Defence we are seeing 10,000 jobs marked to go through ­privatisation.

“That’s why at the moment we have a number of strike ballots—we have just won one in the Driving Standards Agency, where PCS members are due to strike next week.

“But also next month we are getting branches and activists together in a series of regional meetings where we are consulting about the state of play over possible further national action.

“The cuts are now biting so deeply that members are looking to the union to organise further action.

“Our view is that should be done — national action if we believe we can deliver it and the time is right. But also we are encouraging a series of local submissions where we see more sustained action at the points where the cuts are hitting.” 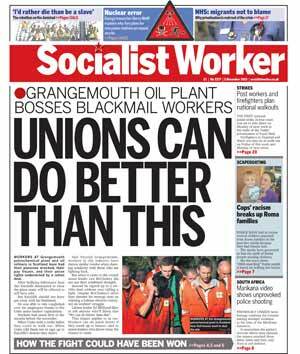 Anti academies conference gathers to discuss how to beat Gove