Sheffield gets the message

Sheffield gets the message

Brian, a local housing campaigner, is standing in Sheffield Brightside constituency against New Labour education secretary David Blunkett. “It was a really impressive meeting,” said Jo, who has been helping organise the Socialist Alliance campaign in the city.

“About one third of the people there I’d never seen before. Most people who came put their names down to help out, and we collected hundreds of pounds that evening.” The meeting has been followed by a busy schedule of campaigning in the city. The next day some 25 Socialist Alliance supporters joined a protest over the government’s benefit “cheat” line outside the city’s Benefits Agency.

They were also furious that candidate Brian Wilson, who is disabled, has been hauled in by the agency for an interview over the benefits he receives-because he was part of a protest over housing!

Both Brian and Nick were set to be busy this Wednesday and Thursday as they were to escort visiting Dudley NHS strikers around workplaces across Sheffield urging solidarity with their fight against PFI privatisation. And this Friday a protest was also due outside a visit by David Blunkett to Sheffield College. Then on Saturday Socialist Alliance supporters were to join Globalise Resistance activists for another protest outside the city centre Gap store over sweatshop labour.

As well as these kind of activities, “leafleting of wards is well under way as well”, says Jo. “In just one ward over 26 local people have been involved in delivering leaflets. That shows the kind of broad network we can build.”

THE National Network of Socialist Alliances has produced 15 excellent new posters detailing the pledges of the Socialist Alliance. The posters come in packs of 80. Each pack costs 8. To order phone 020 7536 9696.

THE SCOTTISH Socialist Party’s election campaign in Edinburgh East & Musselburgh got off to a flying start last week with a 60 strong public meeting at Musselburgh’s Brunton Hall. SSP candidate Derek Durkin is a leading member of the CWU postal workers’ union in Edinburgh.

Derek spoke about the way in which Post Office management are trying to prepare the way for more privatisation. The Scottish Socialist Party’s MSP Tommy Sheridan gave an inspiring speech that convinced many people in the hall that building a socialist alternative in Scotland is now on the agenda.

After handing out leaflets condemning the record of the Labour government and calling for a vote for the Socialist Alliance candidate Kirstie Paton, a local teacher, the protest moved inside to speak to the MP directly. Kirstie Paton challenged Raynsford to condemn handing over the running of her school to a private company in a proposed PFI privatisation scheme.

Raynsford, however, defended the move, saying he welcomed the profit incentive into the education system in Greenwich. Students wanted to discuss Labour’s so called ethical foreign policy in relation to the building of the Ilisu dam and the destruction of the homes of 25,000 Kurds with the MP.

He claimed to have little to no knowledge of the issue, despite being on two trade visits to Turkey accompanied by one of the bidders on the dam project. Protesters went off immediately to mount stalls in the area to build the Socialist Alliance and give local people a real alternative at the next election. 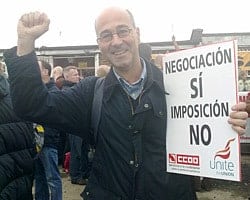 Rally to save Camberwell job centre 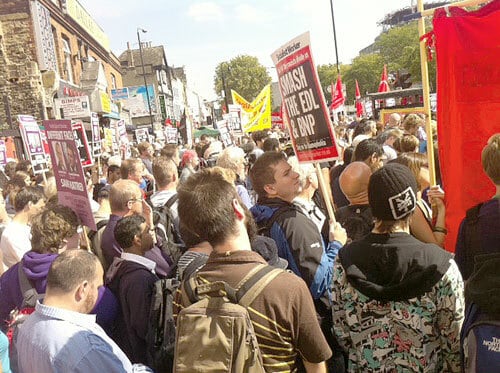