Sheffield Respect gears up for election

This article is over 17 years, 2 months old
Respect activists have hit the ground running in Sheffield. They are preparing for the general election, expected to take place on Thursday 5 May.
By Anindya Bhattacharyya
Downloading PDF. Please wait...
Saturday 02 April 2005

Respect activists have hit the ground running in Sheffield. They are preparing for the general election, expected to take place on Thursday 5 May.

A four page leaflet introducing Maxine Bowler, Respect’s prospective candidate for Sheffield Central, has now been delivered to every home in the constituency.

Maxine will be standing against the current MP for Sheffield Central, Richard Caborn. He is the government minister in charge of London’s Olympic bid and a close ally of John Prescott.

“We don’t see very much of Richard Caborn really,” says Maxine. “This is the youngest and most multicultural constituency in the city, but it’s also the poorest. We have high unemployment and some very bad housing. The constituency needs someone who will give it some attention.”

Caborn has a typical New Labour track record, she adds. “He voted for the attacks on civil liberties, for the war on Iraq and for foundation hospitals. He has supported every piece of bad legislation from this government.”

Maxine’s campaigning activities so far have centred on reaching out to meet key communities and workplaces.

“We’re networking with lots of people from lots of communities — Somali, Yemeni, Arab and Pakistani. We’re talking to imams and community leaders,” she says.

Trade union activists are another target. “I’m meeting the Fire Brigades Union this week, and the secretary of Sheffield Trades Council, to try and get them on board.

“The authorities are trying to close a fire station here. If something big happens they won’t have enough fire engines to go out and deal with it. I’ll be asking trade unionists what we can do to help.”

Hustings are another chance to get the Respect message across. “We’re trying to get trade unions to come together and organise hustings. We’re also approaching some community groups to see if they can put on a joint event.”

While Maxine is busy visiting people and networking, other Respect activists are focused on the organisational aspects of the campaign.

Sharon Price is the campaign manager for Sheffield Respect. She coordinates leafleting, canvassing and street stalls.

“We’ve broken the constituency down based on the results from the 10 June European elections last year,” she says.

“We’ve divided the wards into a ‘premiership’, ‘first division’ and ‘second division’, depending on how well we did. The four wards in the ‘premiership’, where we did best, are all mixed inner city areas.”

By prioritising areas where Respect already has a presence, Sharon hopes to consolidate Maxine’s vote and build up further layers of activists that can help in the campaign.

“Those key areas are where we got massive votes, so we know we have got our core support there,” she says. “We’re canvassing them thoroughly to make sure that core vote gets out.”

The first division areas are the next priority for canvassing. The second division wards are being handled by Respect activists from nearby towns such as Barnsley and Chesterfield who are coming to Sheffield to help with the campaign.

A second leaflet is now being put together, says Sharon, with a four page tabloid also in progress and a “short, sharp” postcard to be delivered just before the election date.

One key tactic is for activists to chase up contacts as they leaflet. Contact names are passed on to area captains, who then visit them at home to see if they can help the campaign or contribute funds.

Sheffield Respect has also secured an office above a local progressive cafe, which had been being used by the Stop the War Coalition. The owner is a Respect supporter and is leasing the space at a discount.

“It’s a fantastic office, right in the middle of the most mixed area of Sheffield,” says Sharon. “We hope it will become a drop-in centre for people who want to find out more about Respect and get involved.”

The campaigning is due to gear up as the general election nears, with more walkabouts, cavalcades and social events.

A press launch is being planned and local bands are being approached to play benefit gigs. Comedian Mark Steel will be appearing at a May Day social event for Sheffield Respect. 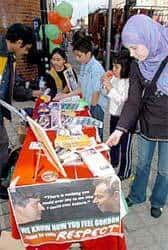