Sheffield’s all-out strike has shown that workers have power

An all-out strike by 35 GMB union members at Sheffield Recycling Centres has been suspended.

Workers were fighting cuts to opening hours, five job cuts and pay cuts. After 39 days of strikes the charity Sova Recycling has made an offer.

If honoured, the offer will reinstate all job losses and provide a trial bonus scheme that could give a £2 an hour rise to all workers.

Annualised hours would be optional. Pay for those who failed to secure foreman positions would be protected until December.

The reduction in services across the five sites would total five days lost per week instead of the proposed 20 days. This also means workers lose fewer hours and less pay.

The council says it will review the recycling and green waste strategy and involve the GMB. There is potential to increase opening hours and recycling services.

GMB members will review their position after three weeks to see if Sova and the council have honoured their offer.

The strike has shown that small groups of determined workers can force employers back.

They won many supporters who will stand with them again in any future fights. 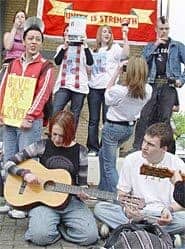 Strike in defence of real education

Striking for pensions in further education