Shifts in the ‘war on terror’ that bring more death

This article is over 12 years, 0 months old
A number of significant shifts have taken place in the "war on terror" since Christmas. US rhetoric against Yemen has been cranked up since the failed Detroit plane bomber claimed to have been trained in the country.
By Siân Ruddick
Downloading PDF. Please wait...
Tuesday 12 January 2010

A number of significant shifts have taken place in the “war on terror” since Christmas. US rhetoric against Yemen has been cranked up since the failed Detroit plane bomber claimed to have been trained in the country.

But the US has been involved in Yemen for many years – training corrupt Yemeni government forces and handing over millions of dollars in military and “social” aid.

US president Barack Obama has loosened the criteria for people being placed on the “no-fly” list, leading to dozens of people being added to the list on the basis of US and foreign intelligence.

It is thought that over 4,000 people are on the list, with up to one million on the US government’s list of people to watch.

The growing panic from governments about the threat of terrorism comes as Gordon Brown prepares to host a summit of imperialist powers about the state of the war in Afghanistan.

Yemen has now been hastily added to the agenda of this summit.

The people of Yemen must be terrified – as when world leaders meet to discuss a country it usually results in bombings, sanctions or the label of “failed state” being applied to it.

Brown wants to be seen as a world statesman, but everything he touches turns to dust.

The war in Afghanistan, which Brown continues to back to the hilt, is lurching from crisis to crisis. President Hamid Karzai is mired in corruption and a crisis of credibility.

Resistance to the occupation is rising. Two British soldiers have already died in Afghanistan this year, alongside 15 other US and Nato troops.

The anti-war movement predicted the occupation would be a disaster from the start, and it has been proved right.

The Stop the War Coalition is organising a demonstration outside the proposed conference in central London on Thursday 28 January.

Syed Bokhari, a Stop the War activist from Sussex university, told Socialist Worker, “Every time these leaders meet it means more death and destruction. Their plans make the world a more dangerous place.

“Students and workers need to blockade this conference and show these people that the world is against their wars.”

Meanwhile, the Chilcot Inquiry into the invasion and occupation of Iraq continues to hear uncomfortable revelations about the run-up to the 2003 war for former prime minister Tony Blair.

His former spin doctor Alastair Campbell defended the decision to go to war and the notorious “dodgy dossier” about non-existent weapons of mass destruction at the inquiry this week.

Blair is due to be questioned in public by the inquiry in the fortnight after 25 January. He will undoubtedly wheel out similar lies and evasions in his defence.

Anti-war campaigners will be staging a protest outside, showing that we have not forgotten the actions of this warmonger.

The continuing turmoil in Iraq caused by the war and occupation was confirmed this week when a huge lockdown was imposed in Baghdad as Socialist Worker went to press.

The Iraqi capital has been rocked by car bomb and suicide attacks in recent months.

For more details of the upcoming protests go to » www.stopwar.org.uk

For more on Yemen go to » A dirty war in Aden: Britain’s role in Yemen’s history and » ‘Failed states’: a loaded term 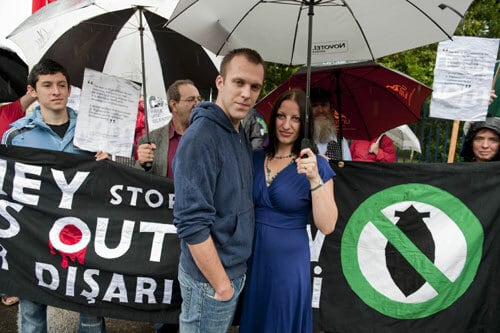