Should unions and Lib Dems link up?

Should unions and Lib Dems link up?

MORE AND more union leaders are flirting with the Liberal Democrats. Last week the GMB’s general secretary, John Edmonds, announced he is to hold talks with Liberal Democrat leader Charles Kennedy. They will discuss the future of public services.

The GMB has already announced it is holding back 1 million from the Labour Party over the next four years. Some of that will be used in cooperation with the Liberal Democrats over a campaign on public services. Bill Morris, the Transport and General Workers Union leader, and UNISON leader Dave Prentis have said they will hold talks with Charles Kennedy in September-just before Labour’s conference

Behind these moves lies disillusion with New Labour and growing pressure from union members to look at alternatives to its pro-business policies. It is right to be angry with New Labour and look for alternative uses for some of the money in the political fund. But it is a mistake to turn to the Liberal Democrats. It is going back to the 1890s.

The Labour Party was formed because at the end of the 19th century workers, especially trade unionists, had realised the Liberals were hostile to working class interests.

During most of the 1850s and 1860s the British economy boomed. The large majority of workers could believe that capitalism was working for them. Only a minority of workers had the vote. Most of those voted Liberal despite it being a major party of British capitalism.

There were several Lib-Lab MPs-trade union officials who accepted Liberal politics. But as boom turned to bust, the ideas of “social partnership” between bosses and workers were shattered.

The employers were no longer prepared to make concessions. Their attacks to maintain profits grew. The fightback against wage cuts and unemployment was spearheaded by the “New Unions”, organisations of the unskilled.

As the unions grew, so did anti-union laws. An act of 1871, pushed through by a Liberal government under prime minister Gladstone, said strikes were legal but anything done to promote a strike was illegal.

The space between organised labour and the Liberals became a yawning gap. A series of strikes saw titanic battles between unions and ruthless employers.

These included the 1893 miners’ lockout-the biggest industrial dispute in British history up to that time. It involved over 300,000 workers and ran for five months.

The Liberal government forced through a “compromise” which saw wage cuts of 10 percent and layoffs to restore profit. During the 1898 miners’ strike in South Wales not a single Liberal MP backed the miners.

In 1901 the Taff Vale judgement (about a railway strike) outlawed picketing and ordered unions to refund any money lost by a company during a dispute. Even conservative union officials knew the unions would be destroyed unless such laws were defeated.

There was a great argument inside the British working class. Some argued for hanging on to the Liberals at all costs. Others recognised that workers must organise themselves. The early Labour leaders were forced to form their own party. During the last decade New Labour’s “modernisers” have challenged any notion of a class-based party.

Blair has been at the forefront of saying that the break from the Liberals was a tragedy. It would be dreadful if the unions, recoiling from New Labour, backed Labour’s inferior predecessor.

At the last election the Liberal Democrats put forward some policies which were to the left of New Labour’s-a little more tax on the rich, less horrendous treatment of asylum seekers, slightly less enthusiasm for privatisation. But the centre of their politics is pro-business and pro-profit. As their manifesto put it, “We are committed to a free market economy in which enterprise thrives. Competition and open markets are by far the best guarantee of wealth creation.

“It is the government’s role to ensure the conditions under which competition can flourish. Labour has over-regulated in some areas.”

And, as they have shown whenever they get to lead a council, the Lib Dems can be even more right wing in power than New Labour. The Lib Dems would love to get some union money. They will therefore make sympathetic noises towards union leaders.

But they will balk at any serious campaign to renationalise the rail, end PFI or support strikes against Post Office privatisation. Instead of getting into bed with Charles Kennedy, the unions should free up their political funds to allow them to support parties and groups which truly reflect the unions’ objectives and policies.

For most unions that means parties which are against privatisation, want repeal of the anti-union laws, campaign against racism and the Nazis, and want properly funded public services.

The Socialist Alliance and the Scottish Socialist Party fit the bill. The Liberal Democrats do not. 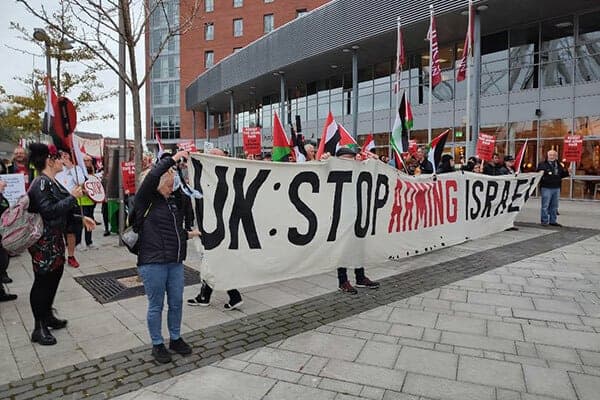 Lecturers fight for their union at the College of Haringey, Enfield and North East London