This article is over 10 years, 6 months old
Electricians marched, blocked roads and construction sites, and even occupied a site in London on Wednesday of last week.
By Simon Basketter
Downloading PDF. Please wait...
Tuesday 01 November 2011

Electricians marched, blocked roads and construction sites, and even occupied a site in London on Wednesday of last week.

They have protested every week since August against bosses’ plans to tear up their terms and conditions.

Besna would cut wages by up to a third.

In London, some 350 workers and supporters assembled at the Balfour Beatty Blackfriars site and blocked the entrance.

Balfour Beatty has issued notices to almost 1,700 workers saying they will be sacked if they don’t sign new, worse contracts.

The workers’ Unite union has announced a ballot of the company workforce against this attack.

The first official strikes are planned for 7 December, the day the new contracts will be imposed.

But many workers are concerned about the timetable for action.

One Balfour Beatty electrician told Socialist Worker, “The ballot is supposed to start in the second week of November, which is cutting it a bit fine to say the least.

“But the pressure from the protests is growing—and we are getting organised.”

There is a national day of protest for construction workers on 9 November—the same day as the national student demonstration in London.

One electrician said, “The students have shown they have supported us, it’s really important we support them.

“I’m looking forward to 9 November when we will all be on the streets together.”

Members of the NUT, UCU and Prospect trade unions all brought messages of solidarity.

The protest then marched along the road through torrential rain to the Cannon Street station construction site.

Gratte Brothers is the electrical contractor on site.

It is one of those trying to tear up the workers’ national agreement.

The protest blocked the road and held up traffic. Police arrested one protester, who was later released without charge.

A number of workers temporarily occupied the site. Supporters hung a huge banner reading “All power to the sparks” outside the building.

Workers on-site quickly made a cardboard sign saying “No JIB Cuts” and held it up to cheering protesters outside.

Other workers from the site joined the protest.

Many inside took an “extended tea break”—for over an hour.

Some of them told a manager that the contractor wanted to cut pay to £10 an hour.

The manager said he “would pay £1 an hour” if he could.

One electrician inside the site told Socialist Worker, “The protest is brilliant. I’m furious at what the contractors are doing.

“We need to stick together to stop them.”

Protesters demanded that a workers’ rep be allowed to address the workforce.

A representative of the rank and file did so, and a union meeting has been arranged for later in the week.

Initially managers were reluctant to give back the “All power to the sparks” banner.

But a suggestion that the protest could become

permanent focused minds and it was safely returned to protesters.

There were also protests at the Govan shipyard in Glasgow and at Carrington paper mill in Manchester.

In Manchester workers at the mill refused to work, despite being told they faced the sack for doing so.

Minibuses full of workers refused to cross the picket line and numerous delivery trucks turned around.

The protests and pickets of the electricians are inspring.

An escalation in the next two can stop building bosses’ attacks. 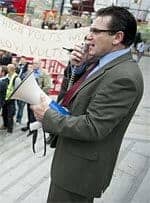 Back the national day of action to support construction workers