Shut the construction sites down

This article is over 10 years, 3 months old
Electricians’ protests are growing against bosses’ attempts to slash pay by over a third.
By Simon Basketter
Downloading PDF. Please wait...
Tuesday 04 October 2011

Electricians’ protests are growing against bosses’ attempts to slash pay by over a third.

Shouts of “The workers united will never be defeated” filled King’s Cross train station in London on Wednesday of last week.

Some 350 protesting electricians held an impromptu meeting inside the station.

Around 80 also protested in Glasgow and 60 in Liverpool.

Last week’s protests are part of a rising tide of resistance among construction workers.

Demonstrations have taken place at the Tyne Tunnel in Newcastle, Manchester’s MediaCityUK, the Edinburgh city chambers, the Glasgow Velodrome and SPIE Matthew Hall in Liverpool.

In London last week, workers blockaded the main entrance to the building site behind King’s Cross and then marched to another entrance where they blocked the road.

Bosses want to tear up terms and conditions in the Joint Industry Board (JIB) national industry agreement and impose a 35 percent pay cut.

There is clear determination among the electricians to take direct action to stop them.

One electrician told Socialist Worker, “The union leaders say they are in favour of direct action.

“We’re giving it to them. Let’s see them give the green light to industrial action.”

Unite union officials were applauded when they committed to a strike ballot to defend the JIB agreement “as soon as possible”.

But there is some impatience among the electricians.

The employers are rattled., On the King’s Cross site the contractors NG Bailey issued letters, telling workers to ignore the protest and claiming that it wasn’t supported by the union.

Inside King’s Cross station Mick Dooley from the Ucatt union was cheered as he read from the socialist novel, The Ragged Trousered Philanthropists.

There were banners from Camden Unison, Soas Unison, PCS Euston, Right to Work and the National Shop Stewards Network.

Speakers from the RMT, PCS and Unite aerospace, among other unions, brought solidarity, as did Labour MP John McDonnell and Unite activist Jerry Hicks.

A number of speakers pointed to the upcoming public sector strikes on 30 November.

One worker told Socialist Worker, “It’s obvious we have to be out with everyone else in November—ballot or no ballot.” The urgenct task is to start shutting down sites, officially or unofficially.

Construction fight in Manchester too 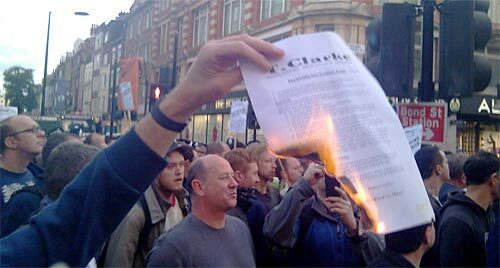