IT WAS a delicious moment. Everyone I have spoken to over the last few days had the same reaction on hearing on Thursday of last week that Tony Blair’s 16 year old son, Euan, had been found drunk and incapable in Leicester Square in a pool of his own vomit.

They all said that workmates and neighbours instantly came out with the same question-“Did the police whip him off to the nearest cashpoint machine and force him to withdraw 100?”

That was Blair senior’s bonkers plan to give police the power to fine people on the spot for being drunk in public.

The Downing Street spin machine realised it could not kill the story of Euan’s binge. So it decided to encourage the papers to bury it with humour instead. Blair’s chief of spin, Alistair Campbell, tried to milk our sympathy. Lots of 16 year olds get paralytic, especially after their GCSEs, he said, but most do not find their pictures splashed over the front pages when they wake up with a hangover the following morning.

My heart bleeds. Euan’s dad specialised in pious moralistic speechifying even before he became leader of the Labour Party. He and New Labour have systematically vilified working class people, and especially single parents, for failing to live up to the high standards the Blairs and other middle class families supposedly maintain.

They conjure up images of out of control teenagers and parents who just cannot be bothered to find out what their children are up to or to cooperate with the authorities to keep them in order. Home secretary Jack Straw wants the courts to issue more anti-social behaviour orders and compulsory parenting classes to deal with such people. Yet when Blair’s boy goes on a bender (and when Straw’s gets caught offering cannabis deals) we are all supposed to reflect on just how hard it is to bring up children in this day and age.

We are even told that poor Tony might be being kept awake by his newborn son, Leo. Yes, it is hard bringing up children. But not when you have a household income approaching half a million pounds and unlimited access to childcare. Blair knows the story is politically embarrassing. But he has no idea why millions of people feel that he has got exactly what he deserves.

It is now common for journalists to say that Blair is in trouble. Last week began with Ken Follett, who helped to pioneer New Labour, sticking the knife into Blair. Tuesday brought more stories of cabinet divisions over Europe. Blair was kippered at prime minister’s question time on Wednesday. Then came Euan’s arrest and, on Friday, further rows over Europe, which look set to fester on.

Blair’s recent debacle at the Women’s Institute conference was supposed to have ushered in his bad week. That has now turned into a bad month. There are signs of panic among the narrow group around Blair who make up New Labour.

They are blaming spin-saying their attempts to manipulate the news have backfired. But weren’t we led to believe that mastery of the media made Blair the best choice for Labour Party leader and the party itself electable? New Labour’s change of course is typically shallow. It is investing in a new computer system, called Agenda, which is supposed to be able to churn out impressive lists of government achievements for people in every town and constituency.

But the problem is not that millions of Labour voters do not understand the government’s achievements. They understand them all too well. They feel the pressure of flexible working.

They see politics reduced to the spectacle of New Labour and the Tories outbidding each other to befriend big business and heap abuse on its victims. People are sick of Thatcherite snots, speaking New Labour management babble, telling them how to live their lives while condemning their children as anti-social monsters who need more authoritarianism at home and school. Blair and those around him don’t see this mood.

That’s not surprising-they don’t even understand why they are in government. They still believe they won the election because they made themselves virtually indistinguishable from John Major, rather than on the back of a wholesale rejection of Tory policies.

That is why there is no reason why the Tories should automatically benefit from Blair’s woes, provided those who are sickened with Blair build a vibrant opposition to his left. 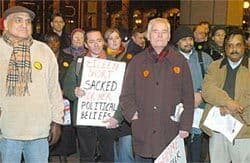