This article is over 10 years, 11 months old
Add your signature to the statement that appeared in the Guardian on Wednesday 9 February.
Downloading PDF. Please wait...
Wednesday 09 February 2011

We the undersigned believe David Cameron’s statement that multiculturalism has failed was a dangerous declaration of intent.

David Cameron’s speech was reminiscent of Margaret Thatcher’s infamous 1978 statement that Britain was “being swamped by alien cultures”. He has branded Britain’s Muslims as the new “enemy within” in the same way as Thatcher attacked the miners and trade unions.

David Cameron is attempting to drive a wedge between different communities by linking Britain’s multicultural society with terrorism and national security. David Cameron’s speech was made on the same day as the English Defence League brought its bigotry and violence to the streets of Luton.

Mr Cameron’s aim is simple as it is crude – to deflect the anger against his government’s cuts from the bankers and onto the Muslim community. The prime minister is aping attacks by other European leaders like France’s Nicolas Sarkozy, who passed legislation banning the veil, and Angela Merkel, who has also made statements denouncing multiculturalism in Germany.

We the undersigned believe that our multicultural society and the respect and solidarity it is built on is a cause for pride, and reject any moves by this government to undermine and destroy it.

We must not allow this coalition government to turn the tide back to the days when it was acceptable, through ignorance and fear, for people with a different religion, culture or skin colour to be scapegoated and treated as inferior or outsiders.

To add your name to this statement go to http://www.gopetition.com/petition/42826.html

To add your name to this statement go to http://www.gopetition.com/petition/42826.html 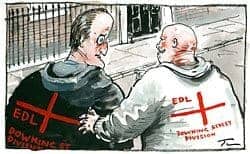