This article is over 14 years, 6 months old
Single status was sold to council workers across Britain as a deal that would bring equal pay for women.
Downloading PDF. Please wait...
Tuesday 05 February 2008

Single status was sold to council workers across Britain as a deal that would bring equal pay for women.

But for all the talk of equality, the Birmingham deal would mean 110 women losing more than £10,000 a year. Across the council, there are twice as many women as men facing pay cuts.

The picture for those who will get pay rises is also pretty bleak. Over 3,000 women are due to gain an increase of less than £99 a year – roughly £1.50 a week after tax.

Homecarers and care assistants are being placed at the bottom of a pay grade, denying them an increase of £2,000.

The single status deal claimed to put right years of injustice where women were paid less than men.

But, as with so many other Labour promises, it has turned sour for those who were supposed to benefit. But strikers are demanding that the council insists on the government – not the workers – footing the bill for fair and equal pay.

Across Britain, councils are pushing through attacks on workers through single status.

Birmingham is the largest and most collective fight yet against the harsh reality of the deal. Other workers should follow their lead. 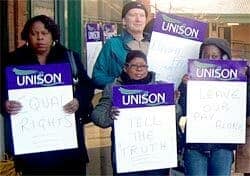