Around 300 council workers lobbied Birmingham council’s cabinet meeting on Monday lunchtime. The meeting was due to decide to implement the single status proposals.

The council has started offering home care workers back pay. While this is not the full six years they are entitled to, many people are signing when offered up to £30,000.

However the home care workers are far from happy with the council as their new contracts – to be introduced in June – are believed to require split shift working.

The Unison union branch is circulating members with details of councillors’ surgeries with a proposal that those standing for re-election this year are lobbied.

The battle in Birmingham is far from over. Thousands of workers are still waiting for back pay, and they are likely to be offered a worse deal than the home care workers.

And one in seven workers will have their pay cut. Specifics of who loses, and by how much, have yet to be revealed.

Nine union members in the refuse and cleansing section are to be dragged before disciplinary hearings for sticking to the council’s own safety agreement and refusing to speed up work after the snow in February put rubbish collection behind.

Is this an attempt to intimidate union members who stand in the way of the total flexibility and pay cuts that the council want to push through in the single status agreement?

When workers refused to rush through two days work in one to catch up, the council at first accused the T&G and Unison unions of taking part in illegal industrial action. It then threatened to sack members of Unison whose union had refused to issue repudiation.

It has since backed down from this but had told the unions that they intend to “teach us a lesson”. It is pushing ahead with disciplinary action at the same time as it is calling workers into meetings without union reps. There they are instructed to sign the new contracts that the council wants to impose under single status.

Newham Unison is not accepting the single status offer because it seeks to impose pay cuts of up to 20 percent on some workers while denying women full equal pay rights.

On just one thing our management are right – we are learning from this latest attack.

That lesson is the age old one – an injury to one is an injury to all. We will be sticking by our members and demanding that the regional and national union officials likewise offer strong support to those now being held up as examples.

Glasgow City Unison union has agreed to request a strike ballot of workers who are adversely affected by cuts in overtime and anti-social hours payments.

In December 2006 a planned branch-wide strike action was called off by branch Unison officials when the council agreed to extend protection to workers downgraded in the single status pay and benefits review beyond 2009.

However, many other issues such as overtime rates were unresolved.

Social care workers believe they have been wrongly placed in a lower band.

Some 93 percent of Unison union members have voted against the council’s single status pay proposal.

Workers have hit out at the council’s offer of up to £500 to workers to sign new pay agreements in a move they claim is calculated to rush through a single status pay deal.

The Unison union says council employees are being offered £200-£500 to agree to changes in terms and conditions – which the workers have not even seen.

'Labour has betrayed the elderly' 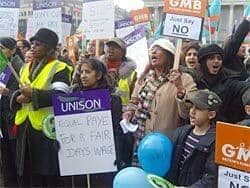