Some 240 Unison and T&G union members went on strike after the council threatened to sack all care workers on 18 February if they don’t accept pay cuts.

The mostly women workers were striking for the first time. They voted to walk out by a margin of eight to one.

They face cuts to pay for anti-social working hours, ranging from £25 to £140 a week.

The workers defied the council’s decision to enforce a ban on a protest on the steps of Southampton civic centre ahead of this Monday’s cabinet meeting (see picture).

“Care workers are determined to show that they will not be blackmailed.

“In order to cover the work of the strikers, the city council has drafted in other council workers who are not trained in providing personal care.

“Disgracefully, it is also using untrained, unqualified temporary staff to work with the elderly and the frail.”

Action over single status in Coventry 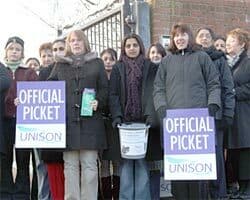