This article is over 10 years, 5 months old
Journalists at the BBC Arabic service were on strike this week against rota changes and compulsory redundancies.
By Anne Alexander
Downloading PDF. Please wait...
Tuesday 02 August 2011

Journalists at the BBC Arabic service were on strike this week against rota changes and compulsory redundancies.

Youness Aitmalek, one of the strikers, spoke to Socialist Worker on the picket line at Broadcasting House on Saturday.

“We are on strike for six days because management don’t have any respect for us.

“They have changed our rotas in a way which has a big effect on our lives.

“Most people live outside London and if they have to start at 7 or 8am they can’t get transport.

“Staff cuts are affecting the quality of what we do. We have suffered compulsory redundancies, which management insisted on despite the union offering alternatives.

“Our strike is very solid. We expect 94 percent of BBC Arabic journalists to be on strike.

“This is the fourth time we have taken action this year over issues ranging from pensions, rotas and redundancies.

“They will rely on repeats and bring in freelancers—but we know we are having a big effect.

“The strike was a last resort for us. We are striking for our lives. I know guys working here who barely see their kids because of the hours we work.

“At a time when people in the Middle East are making revolutions, we are organising a revolution of our own—against the BBC bosses.”

BBC strikes have power to turn over bosses 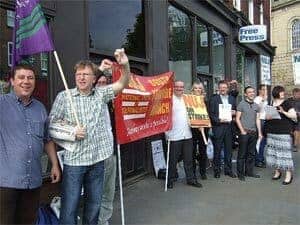 Fighting for our jobs - and quality journalism