NUT union members have voted by 86 percent for strikes in a consultative ballot on a turnout of 36 percent.

A formal ballot will begin on Monday of next week and end on 29 February.

The union also plans to hold a national demonstration on the day of the strike, 15 March, if workers deliver a yes vote.

Tom Woodcock, an NUT rep and sixth form teacher in Cambridge, told Socialist Worker, “We’ve got to build the strike day and protest as something that everyone can get involved with.

“The union has said it will fund transport. Teachers should encourage their students to go.”

The Tories are conducting “area reviews” to ram through savage spending cuts in further and adult education.

Tom said, “They are trying to force mergers between sixth forms and colleges, or to force sixth forms to become academies.

Ken Muller, a sixth form teacher and joint secretary of Islington NUT in north London, told Socialist Worker that the dispute was part of a bigger battle.

“We’re firing the first round in a battle against the Tories’ education funding cuts,” he said. “It’s really important that other teachers support us.

Sign the petition to save sixth forms at bit.ly/1WX4l32

The ucu union suspended a strike at the Open University (OU)planned for Tuesday. It was a mistake to call off the action. OU bosses want to shut seven regional centres and cut around 500 jobs.

OU workers staged a national strike against the cuts on 25 November last year, followed by a series of regional walkouts. Some 72 percent of OU UCU members backed strikes in a ballot. 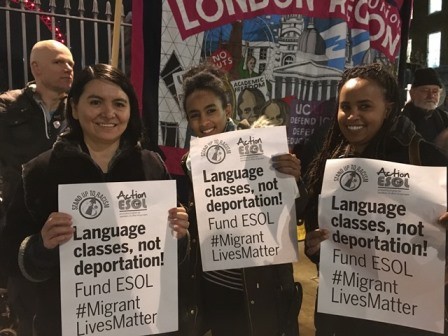