Slaughter of the civilians

This article is over 19 years, 3 months old
THE DEAD and dying overwhelmed hospitals in Baghdad and other Iraqi cities as US forces bombed and blasted their way into civilian areas. The pictures don't make it to the BBC and Western news channels. The descriptions are buried in acres of triumphalist media coverage of US advances. But the cluster bombs, artillery barrages and tank attacks have shredded the lives of thousands of Iraqi people.
Downloading PDF. Please wait...
Saturday 12 April 2003

THE DEAD and dying overwhelmed hospitals in Baghdad and other Iraqi cities as US forces bombed and blasted their way into civilian areas. The pictures don’t make it to the BBC and Western news channels. The descriptions are buried in acres of triumphalist media coverage of US advances. But the cluster bombs, artillery barrages and tank attacks have shredded the lives of thousands of Iraqi people.

A surgeon at the Kindi Hospital in Baghdad could not cope when hundreds of US bomb victims were admitted last weekend. ‘It was the most terrible day of my life,’ said Doctor Duleimi, who had worked through the first Gulf War. ‘Before the war I did not regard America as my enemy. Now I do. America is killing civilians.’

Antonella Notari of the International Red Cross confirmed that other hospitals were desperately struggling to cope with the victims of the US onslaught. The Mahmoudiya Hospital to the south of Baghdad witnessed a leap in the casualty count when a unit of the 3rd Infantry Division broke through south west Baghdad. US military sources admitted that up to 3,000 Iraqis were killed during the three-hour attack.

A colonel said the troops were too busy to stop and count the Iraqi dead. US reconnaissance helicopters reported ‘streets littered with Iraqi corpses’ following the attack on the city of Karbala. No one can honestly believe the propaganda about ‘a clean war’ after what happened last Sunday.

The US bombed a convoy of Kurdish officials who were travelling with US special forces. Over 50 people were injured and 18 were blown to pieces. The BBC’s John Simpson was hit by shrapnel and described the aftermath as a ‘scene from hell’. Countless other parts of Iraq have witnessed such scenes. And on the ground US forces continue to treat Iraqi civilians as the enemy. Last Friday US marines almost entirely wiped out an Iraqi family at a checkpoint.

Fifteen year old Omar survived. His father, mother, uncle, two sisters and a brother were mown down. We may never know how many have already died even before the destruction of Iraq’s infrastructure claims more lives – especially of the very young and old.

THE HUMANITARIAN crisis has increased in Iraq just as US and British generals are boasting of their successes. Aid agencies are shocked by the lack of humanitarian aid. ‘Liberated’ children in Umm Qasr have been forced to beg for water on the streets. This was the town the British troops said they had taken days into the war. In the two weeks that followed just one ship, Sir Galahad, arrived bringing aid to Iraq.

The British even delayed the Sir Galahad’s docking at Umm Qasr until the press could arrive. The Cafod charity last week described the British humanitarian effort as ‘shockingly poor’. It said conditions in Umm Qasr are ‘horrendous’.

Spokesperson Patrick Nicholson said, ‘Humanitarian need had not been met in certain areas. In certain parts people still have no water and in others they have nothing to eat but tomatoes. But Umm Qasr has only 40,000 people and it’s been in coalition hands for two weeks. It bodes badly for Basra and Baghdad. There is a humanitarian need for water and it is not being met.’ He added that the local hospital has no water and one doctor is treating 400 patients.

The pro-war Times admitted the scale of crisis this week, saying, ‘Many Iraqis have complained that they are far worse off now than they were before the war.’ Aid agencies say the few supplies they get in fall far short of what the Iraqis need.

Unicef lorries carrying health kits were due to set off to Nasiriya this week. ‘None of this is enough. Our drivers are coming back with long lists from doctors of what they need,’ said Wivina Belmonte from Unicef. Damien Personnaz, another Unicef spokesperson, said, ‘The water needs are really serious, and they are going to get worse.’

US BOMBERS hit the Al Jazeera news channel in Baghdad this week, killing a cameraman. The Qatar-based station is a thorn in the side of the US and Britain because it reports the horror of the war and, unlike the BBC, remains objective. Its independence was underlined days before the bombing when Iraqi officials claimed the station was ‘pro-Western’.

The US also hit another Arab news network’s offices, Abu Dhabi TV. Their forces sprayed the offices with artillery fire and the station says it has lost contact with a reporter.

During the war on Afghanistan the US bombed Al Jazeera’s offices in Kabul. The US stock exchange has banned Al Jazeera journalists from its premises.

TWO cameramen were killed and four journalists injured when a US tank blasted Baghdad’s Palestine Hotel on Tuesday. TV reporter David Chater said the attack was ‘deliberate. This wasn’t an accident.’

WE VISITED the Yarmouk Hospital. A woman, who had been wounded in the bombing of the Sha’ab district in north Baghdad, was lying in a ward weeping uncontrollably. When I first saw her she looked up at me, and her tearful eyes told of a terrible story.

She broke down in paroxysms of grief, her loud wailing bringing tears to our eyes. There was not a dry eye among any of us as she told the horrible story of the bombing in which her three sons were killed. A missile hit the Sha’ab district as people were going about their business. This is a civilian residential area with small shops and markets. Why was it bombed?

In another ward an old man, also wounded in the bombing of the Sha’ab district, told me all his ten children had been killed. A young boy of about 12 lay in bed without any movement or expression except complete bewilderment. His mother had been killed in the blast. Another man, blood oozing from his face as he lay on his hospital bed, told his story. He had travelled from Syria by bus. As he was nearing Baghdad, he saw three buses fired upon by US planes.

An estimated 70 civilians were killed. I saw a little boy, about ten years old, who was in so much pain he could barely stand. He had been wounded in the abdomen and in the crotch. After we left the hospital we went to a place about half a kilometre away, where we saw a bomb crater in the middle of five houses. The houses were clearly part of a residential area with a school at the end of the street.

Eleven or 12 people were killed in their homes when the missile struck. One of the survivors was also in the hospital in great physical and emotional pain. Even though his leg was raised and bandaged up, blood seeped through the layers of dressing. He told us his house had been destroyed and his family killed. I saw the place in the Sha’ab district where the missile hit. There was a deep crater in the main thoroughfare. Walls of residential buildings on both sides of the road were blown apart. On the other side of the road a woman was yelling something in Arabic about George Bush.

Her rage boiled over as she burst into tears, still cursing him, and then embraced me, sobbing on my shoulder. Today we saw the grief and suffering imposed on civilian Iraqi people, on men, women and children. The horror had just begun.

NEW LABOUR has used the ‘war on terrorism’ to rush through legislation that could affect ordinary people in Britain. Home secretary David Blunkett tacked on a new measure to his refugee-bashing Nationality, Immigration and Asylum Act on 1 April.

He can now take away the right of British citizenship and deport someone whose opinions he regards as inflammatory. Blunkett’s new law is directed against people with dual nationality. It covers Abu Hamza, the Muslim cleric based in north London who New Labour and the right wing press have campaigned against.

But how many more people with dual nationality, or whose parents were not born in Britain, could potentially be forced out for criticising the government? There are many people in Britain who feel like TGWU union leader Bill Morris when he says, ‘As someone who holds dual citizenship and has upset the home secretary a few times, I now wait in fear for the knock on my door.’

Remains were of war dead

BRITISH TROOPS found 200 human remains in a warehouse near Basra last weekend. A senior military source told the press, ‘This appears to be Saddam’s Auschwitz.’ The press rushed to report that the soldiers had discovered ‘Saddam’s hellish death camp’.

But a day later Iranian officials confirmed the Iraqi government’s story that the warehouse contained remains from soldiers recovered from the battlefields of the 1980-88 Iraq-Iran war. An Iranian general said most of the remains were of Iranian soldiers and were waiting to be sent back to Iran.

Wiping out of witnesses

THE French cameraman wounded when ITN journalist Terry Lloyd was shot dead says that US soldiers were deliberately trying to kill him. The TV crew had witnessed US soldiers firing on civilians.

Cameraman Daniel Demoustier says, ‘I have the impression that the Americans wanted to wipe out troublesome witnesses’.

THE US military admitted last week that its special forces dress in civilian clothes to ‘blend in with the local population’.

US defence secretary Donald Rumsfeld says any Iraqis doing this are in breach of the ‘conventions of war’ and could be sent to the infamous camp at Guantanamo Bay as ‘illegal combatants’.

Heritage to be looted

ART COLLECTORS and lawyers in the US are eyeing up Iraq’s antiques for ‘liberation’. The newly formed American Council for Cultural Policy met with US State Department officials prior to the war.

The group is lobbying for a new law in post-war Iraq to make it easier to export antiquities. The Archaeological Institute of America says the ‘agenda is to encourage the collecting of antiquities through weakening the laws of archaeologically rich nations’.

YOU CAN now pass on letters of support to the two soldiers who were sent back from Iraq for refusing to fight in a war against civilians. 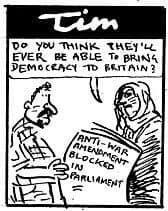