This article is over 12 years, 7 months old
Were bosses of one of the most multicultural colleges in London complicit in an immigration raid that led to cleaners being deported to a country under a brutal regime?
By Sadie Robinson
Downloading PDF. Please wait...
Tuesday 16 June 2009

Were bosses of one of the most multicultural colleges in London complicit in an immigration raid that led to cleaners being deported to a country under a brutal regime?

Were this group of cleaners targeted because of their high-profile union campaigning?

These are the questions being asked by students and union activists at the School of Oriental and African Studies (Soas).

Contractor ISS summoned the cleaners to a meeting at 6.30am on Friday of last week. However, when the cleaners arrived they found immigration officers lying in wait for them.

Nine were detained, and within days five had been deported – with two shipped off to Colombia, a country notorious for its brutal treatment of trade unionists.

The raid sent shockwaves through the college – and workers and students responded immediately.

Within hours the Unison union held an emergency meeting that voted unanimously to campaign against the deportations.

In the evening some 200 people joined a protest rally.

Then on Monday of this week students occupied the college director’s office to demand the return of the deported cleaners and an end to the practice of outsourcing college cleaning services to private companies.

The director’s office was still being occupied as Socialist Worker went to press.

Protesters are outraged at what they see as collusion between Soas management, ISS bosses and immigration officials.

Graham Dyer is the branch chair of the lecturers’ UCU union at the college. “There were two Soas managers on the site at the time of the meeting last Friday,” he told Socialist Worker. “They would not normally be there at 6.30am. They were guiding the immigration officials around the building.”

Sandy Nicoll, the Unison branch chair at the college, agrees. “This could not have been done without Soas management knowing about it in advance,” he told Socialist Worker. “At the very least they facilitated the raid.”

Protesters want to know why immigration officials targeted this particular group of cleaners.

Soas cleaners have recently been involved in a number of disputes. They had successfully campaigned for union recognition and the London Living Wage.

A Home Office source told Socialist Worker that the government department acted after receiving “some concerns from the cleaning company” about the status of the workers.

“Now we wonder if the Soas cleaners are being targeted because they dared to organise as trade unionists.”

A UK Border Agency spokesperson said that the “intelligence led operation” was carried out “with the full co-operation, support and involvement of the employer”. They added, “The success of this operation was in part due to close co-operation with the company involved.”

Some have pointed to other examples where mainly migrant workers have faced immigration checks after organising for their rights.

Socialist Worker reported last year on the deportation of cleaners working for contractors who supply cleaning services for London Underground.

Rosa, one of the cleaners who was seized on Friday, told Socialist Worker, “ISS made this trap because they want to show they are stronger than the union. They want to have people who work for five or six months and then are sent away because of their papers.

In response to the raid, management at the college said, “Soas is legally obliged to co-operate fully with the authorities, even though the people involved are not our employees.”

The Soas raid and the mystery of the missing employer

Immigration laws made for bosses 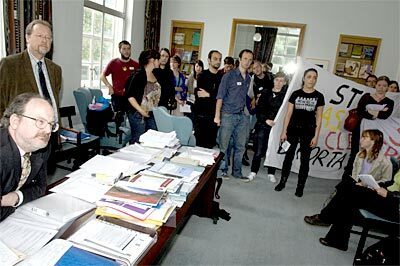