Socialist election candidates are standing up against the cuts

This article is over 11 years, 10 months old
Socialist candidates are providing an electoral challenge to the mainstream parties across Britain. The Trade Unionist and Socialist Coalition (TUSC) is standing in around 50 constituencies.
Downloading PDF. Please wait...
Tuesday 02 March 2010

Socialist candidates are providing an electoral challenge to the mainstream parties across Britain. The Trade Unionist and Socialist Coalition (TUSC) is standing in around 50 constituencies.

David is standing against Hazel Blears, and is backed by the Hazel Must Go campaign.

“Cuts to just about every service are being announced in Manchester,” David told Socialist Worker. “The scale is shocking, it will affect everything from libraries to the arts and schools.

“This is why I’m standing in the elections—we have to stop the destruction of our communities and services.”

David took part in a march last week against the sale of Salford’s moss lands to Peel Holdings, who intend to use the land for peat and gravel.

His campaign team are organising meet the candidate events, running stalls across Salford and making sure that every household is leafleted.

To get involved email [email protected]

Maxine’s campaign was boosted this week with the news that the Green Party will not be contesting the seat where she is standing against Labour MP David Blunkett.

Maxine is also contesting the Burngreave council ward, where she achieved 20 percent of the vote last time round. “Our communities are under attack”, Maxine told Socialist Worker.

“We will lose at least five jobs in adult education in south Sheffield”, Maxine said. “In Burngreave it will mean scrapping English second language and most computer classes.”

In the coming week Maxine will be participating in an International Women’s Day event and speaking to a group of women about building her campaign. Email her at

Martin joined a protest outside the Royal Bank of Scotland last Saturday to demand taxpayers get their money back from the bank.

RBS is 84 percent owned by the government but it paid out £1.3 billion in bonuses to its investment bankers.

Martin said, “The people should control the banks, and the vast sums being used to prop them up must be used to defend and expand our services.”

Join the next TUSC day of action on Sunday 14 March. Go to » Activists’ diary and » www.tusc.org.uk

Across Britain, workers prepare for mass strike on 24 April 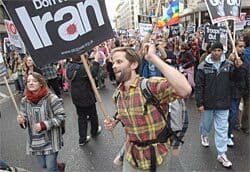