This article is over 7 years, 7 months old
The FBU union walkout last week was the firefighters’ biggest yet in their dispute, reports?Annette Mackin
Downloading PDF. Please wait...
Tuesday 17 June 2014

Firefighters walked out across England and Wales for 24 hours on Thursday of last week. This was the longest strike yet in the FBU union’s three-year dispute with the government.

Workers were out against plans to make them work more years before they can get a full pension.

The scheme has angered workers. “It’s all take, take, take with the government,” one striker in Clapham, south London, told Socialist Worker.

Micky is a firefighter at Islington, north London. “I’ve lost hundreds in money through striking, but you’ve got to do it. We’re all in the same boat,” he said.

More than 300 firefighters and their supporters protested in Manchester.

“It was the biggest demonstration of firefighters we’ve had in Manchester for probably ten years,” said Agecroft fire station FBU rep Simon Hickman.

“The strike was solid, and members came out to protest and let people see how we feel.”

That feeling was reflected all over. More than 150 firefighters and supporters marched to Eric Pickles’ office in Brentwood, Essex, to protest against the attacks on their pensions.

Members of the FBU national women’s committee joined strikers at the Temple Way fire station in Bristol. Pickets in Clapham were joined by workers from Lambeth College, who are on all-out strike.

Matt Wrack congratulated members for their solid support, and responded to criticisms that the rate of escalation was too slow.

He said, “FBU leaders are considering all the different ways of escalating, but one thing is clear we’re not giving up or going away.”

The FBU union has been locked in talks with the Tory fire minister Brandon Lewis since the last strike in May.

As well as the one-day strike, firefighters are set to walk out for seven hours this Saturday.

The London and North West regions of the FBU were central in pushing for the latest strikes—and officials say that more walkouts are likely.

“We wouldn’t be surprised if the fire minister, Brandon Lewis, doesn’t offer us anything after this, so we’ll have to call more strikes.”

More than a million workers are looking to strike together on 10 July over Tory attacks on their pay.

Firefighters are now arguing for the FBU to join other unions in striking on the day.

Yusuf Timms, FBU borough secretary for Kensington and Chelsea, said, “The 24-hour strike is a good start, the members have been really up for it.

“The action has been very stop and start. The union should now look to 10 July.” 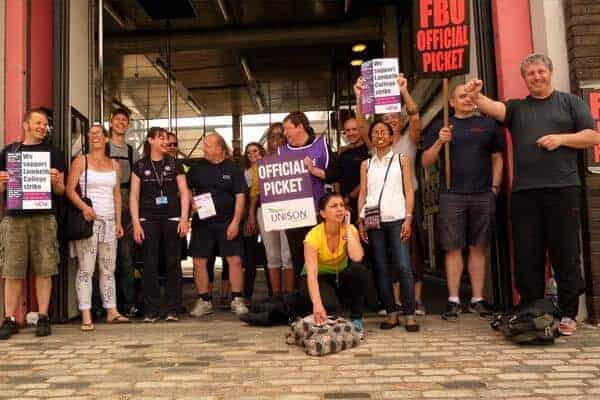 Your photos of the 24 hour firefighters' strike