This article is over 4 years, 8 months old
By Raymie Kiernan
Downloading PDF. Please wait...
Tuesday 09 May 2017

College lecturers in Scotland walked out again today, Tuesday, for their third national strike in a fortnight. It was another demonstration that workers are prepared to take the bosses on.

They urgently need solidarity to sustain the fight and pile pressure on the Scottish government.

The EIS Fela union members escalated strikes this week and took their campaign to high streets across the country. Lecturers are set for another walkout on Thursday in their battle to force bosses to honour a deal agreed last year.

“This action is seriously hitting further education,” Eileen, the EIS Fela union branch secretary at New College Lanarkshire, told Socialist Worker. She said the employers’ attitude was making workers “very angry”, as is the misreporting of their dispute in the press.

Strikers hit the streets to gather signatures on a new petition. It highlights the words of Scottish National Party (SNP) first minister Nicola Sturgeon who called on bosses to “go the extra mile to resolve this dispute”. These words should be welcomed.

But that’s the least she could say—an agreement on equal pay was signed 14 months ago.

Eileen said the petitioning “was very warmly received”. She added that the petition is a good idea because “members want to do more than stand on a picket line”.

Workers plan “to pay a visit to the local MSP’s office” on the next strike day.

City of Glasgow College student Ashley supports the lecturers. She told Socialist Worker, “It doesn’t make sense that they don’t get paid the same. Why should they get paid differently just because of the area that they work in?”

It is two months since the lowest paid lecturers were due to get the first payment to begin to address a £12,000 a year pay gap.

Shirley-Anne Somerville is the minister responsible for further education. At one college strikers marched to management’s offices chanting, “Shirley-Anne—what’s your plan?”

Workers are growing impatient with her and the SNP government. It’s also six years since the SNP promised a return to national bargaining.

Instead of focusing on workers’ conditions the SNP government embarked on a series of college mergers that have cut courses, students and staff.

At the same time tens of millions of pounds of public cash was diverted into unaccountable arm’s length bodies. Top bosses were handed outrageous payoffs.

Jim, the branch secretary of EIS Fela at City of Glasgow College, told Socialist Worker that some of the spending is “not acceptable”. He said, “This college had a grand gala opening.

“The total cost was £51,000—including £26,000 for ‘technical equipment’—for one night, for 400 people. That’s over £60 a head for technical equipment! Everyone can cite examples of expenditure in colleges that perhaps wouldn’t be acceptable elsewhere in the public sector.”

At the heart of the dispute is a battle between educational versus managerial values.

Sturgeon has previously said she wants her administration to be judged on its performance in running the education system. Yet now her party is trying to absolve itself by saying national bargaining is an issue for the employers and the union solely.

As Eileen said, “The college boards are now part of the public governance structure. But there was no further education in Scotland today, or last Wednesday or the Thursday before.

“They have to be accountable—it’s time for ministers to step in.” 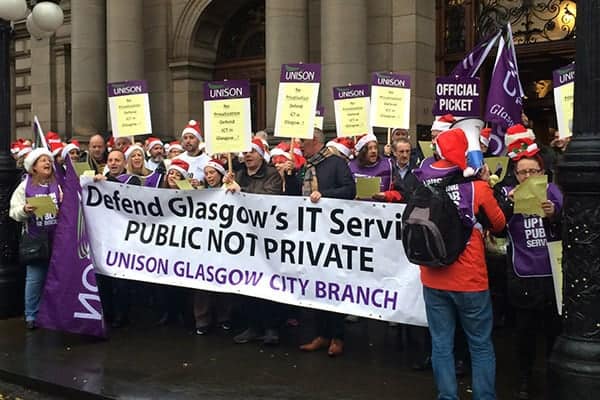