This article is over 16 years, 5 months old
The immediate future of the trade union movement in Britain rests heavily on the outcome of the battle to reinstate 670 workers summarily sacked by the Gate Gourmet catering company at Heathrow last week.
By Kevin Ovenden
Downloading PDF. Please wait...
Saturday 20 August 2005

The immediate future of the trade union movement in Britain rests heavily on the outcome of the battle to reinstate 670 workers summarily sacked by the Gate Gourmet catering company at Heathrow last week.

On one side are ruthless union-busters who hope to blaze a trail for tearing up pay and conditions across the aviation industry and beyond.

Against them stands a courageous group of largely Asian workers. Alongside them are fellow T&G union members at British Airways (BA) who last week delivered the most effective and militant solidarity action seen in Britain for two decades — in defiance of the anti-union laws. Gate Gourmet supplies BA with in-flight meals.

“A victory for Gate Gourmet means other employers will come for everyone in there,” says one sacked worker pointing to the giant Heathrow complex from a mound where workers protest every day.

“BA, Lufthansa and the rest will steam in and do what the hell they like. It won’t stop with the airline industry.

“If we win, it’ll be a different story.” The story will be that workers can fight back and that “old fashioned” secondary action can beat even the most ruthless employer.

Action by hundreds of BA baggage handlers and ground staff who stopped work on Thursday of last week when they heard about the Gate Gourmet sackings brought swift results.

It forced a company that set out to destroy the T&G union at its sites to begin negotiations with union officials on Friday.

The solidarity led to chants of “BA staff, zindabad!” (“Long live BA staff!”) at a 1,000-strong rally of Gate Gourmet workers and their supporters on the same day.

The action was called off after 24 hours, but it points to how this crucial dispute can be decisively won. It grounded all BA flights at Heathrow.

It also brought a torrent of anti-union abuse and lies in most of the media. Workers want people to hear the truth.

“Gate Gourmet — we believe in collusion with BA — planned and plotted to sack us,” said one shop steward.

Documents leaked to the Daily Mirror on Monday confirm what Gate Gourmet workers have maintained—that management schemed for months to push through mass sackings and replace workers with worse paid agency staff.

The secret plan, drawn up in September last year, was ­codenamed “Milestones”. It laid out a detailed conspiracy to “Recruit, train and security check drivers” at secret locations.

Life for the existing workforce was to be made intolerable. The plan was then to “announce intention to trade union, provoking unofficial industrial action from the staff. Dismiss current workforce. Replace with new staff.”

That, with the exception of the unofficial action, is exactly what happened. The document advises Gate Gourmet bosses to tell BA and the airport authorities of their plans when they were close to firing the workforce.

Two drivers recall, “Various things that have happened now fall into place. In June security guards started wandering around in orange jackets. We thought they were in response to the threat of terrorism.

“But the numbers slowly built up and on the day we were sacked there were over 30 of them acting as bouncers.

“A guy who left about six to eight months ago went to register at an agency and was told he would be ‘working at Gate Gourmet at some point’.”

On Wednesday of last week early shift workers at the company’s QCS plant at Heathrow returned from a break to discover at about 9.20am that the company had brought in dozens of agency staff. This was after it had spent months telling workers that there would have to be redundancies because it was in financial difficulty.

The workers said they wanted to discuss the matter with their stewards. Instead, they were corralled into the canteen, where they were denied food and water, and not allowed to go to the toilet.

“Then a manager announced we were all sacked,” says one woman who has worked for the company for eight years. “He used a megaphone. The security guards started grabbing people to throw us off the site.”

“It took them three minutes to produce a sacking leaflet that was in four different languages,” says one shop steward. “This was pre-planned.”

One driver, explains, “We had to run a gauntlet to get out. There were two managers at the door taking people’s passes.

“Behind them, lining the corridor were about 30 security guards. We were frogmarched out of the building.”

Workers on sick leave or on holiday were also sacked.

One 49-year-old driver had booked six days annual leave from Monday of last week to Saturday. Sadly, his mother died and he had to cancel his travel plans. He found out he had been dismissed a couple of hours before his mother’s funeral.

Several married couples were sacked. One worker returned from hospital with her newly born child last week to find that she had been sacked.

On it goes — hundreds of bitter personal testimonies. Each is deserving of the maximum solidarity trade unionists can give. At the end of last week BA workers at Heathrow showed what that means. 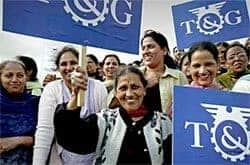