Solidarity from other workers shows the potential to escalate

This article is over 9 years, 9 months old
The level of support and solidarity from trade unionists around Britain shows that workers are willing to take on the Tories.
Downloading PDF. Please wait...
Tuesday 03 April 2012

The level of support and solidarity from trade unionists around Britain shows that workers are willing to take on the Tories.

Groups of PCS union members came out to cheer strikers as they marched through central London. They should have been on strike, but their union pulled out of the coordinated action.

Workers in different unions also joined the march and visited picket lines. Gary Whiting, a Unison member, joined a picket line at Lambeth College. “It’s unfortunate that we’re not part of the strike,” he said.

“On 30 November the strike was very good. I’ve been in the branch for 16 years and it’s the first time I’d seen people so active. It wasn’t just the usual suspects organising it.”

Some Unison members refused to cross picket lines and joined the strike, such as at London Metropolitan University.

Eddie Rowley is a Unison steward there. He said, “A number of Unison members refused to cross the picket line today. The reasons why we struck on 30 November are still valid. It’s important to stick together.”

Ian Bradley, an electrician, carried a Unite construction workers’ banner on the march. “If public sector workers win their dispute it can drive forward others across the trade union movement,” he said.

Andy Bain, a TSSA union activist, brought an Islington Hands Off Our Public Services banner to the demonstration. “We sent tea and coffee to pickets in our area,” he said. “This strike is linked to our struggle against cuts.”

Outside London, UCU and NUT members had twinned with workers in London to make sure they knew they had support across Britain.

Wakefield & District NUT sent cupcakes to teachers in Tower Hamlets with a card containing messages of support for the strike.

Workers have made clear their willingness to strike. In recent surveys, NUT members across Britain backed more strikes by 73 percent. In the UCU the result was 60 percent and in the PCS it was 72 percent.

There is a growing militancy among a section of public sector workers. As one placard on the march read, “Work till you die or strike till you win.” Wednesday’s strike showed the potential for a renewed campaign against the Tories’ pension attacks.

Fight for national action over pensions 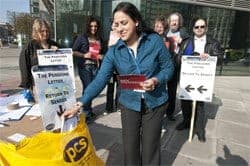