Ten thousand students protested in London against fees and unemployment on Wednesday of last week.

The biggest delegations had been built from campaigns on campus including from Scottish and Welsh universities.

Heather, a student from the University of the West of Scotland, told Socialist Worker, “I’m here in solidarity with people hit by the cuts in England and Wales, and against what’s happening to university funding in Scotland.

“Women students are being hit hard—in our university we’ve been campaigning against cuts in bursaries and people being left with no funding.

“The part time learning grant is under attack—most of the people that rely on that are women with children. These are the people the government is cutting out of education.”

Raif, a college student from north London was marching with Day-mer—a Turkish and Kurdish community organisation. He said he “had no options left” and would have to find work when he finishes college instead of going to university.

“The teachers at college are trying to get me to apply to uni but what’s the point? If I get into uni I can’t afford it, even if I stay living at home. This government doesn’t care about us.”

Dom, a student from Birmingham university, said, “We got a good turnout from Birmingham, but we need to do more. I think we have to fight against every cut on campus and build the movement that way.”

There were delegations of lecturers on the protest from the UCU union. Dave, a retired lecturer who was helping to carry the Keele university UCU banner told Socialist Worker, “Students are being forced to mortgage their futures. We support the students in their fight because we’re up against the same enemy.”

Students on the protest were heavily critical of the route of the march. The National Union of Students (NUS) had agreed with police that students would not march past the Houses of Parliament. At one point students tried to break through police cordons and march towards Parliament Square.

Annika Brown, a student at the College of North East London, said, “The policing is far too heavy. “We should be able to march past parliament so that the MPs hear what we have to say. We need to build the numbers back up so we can push past next time.”

The march ended with a rally in Kennington Park—a long way from the central London rally students wanted. 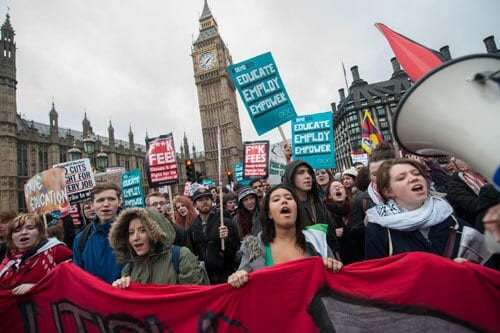 Tell the NUS: it's not enough to wait for a Labour government