This article is over 16 years, 4 months old
We print a selection of our readers’ reports on solidarity with Gate Gourmet workers.
Downloading PDF. Please wait...
Saturday 27 August 2005

I did a collection round the housing office where I work in Camden council. Before I went round I e-mailed all the union members with information about the dispute and said I would be doing a collection.

I pinned up newspaper articles about the dispute on the union noticeboard.

When I went round to people’s desks with the collection sheet, nearly everyone made a donation and lots were putting in fivers. The collection raised £130 from 30 people.

Comments from people as they donated ranged from disbelief that a group of workers could simply be sacked by megaphone to an understanding that this can be the end result of privatisation and contracting out of jobs.

People were really pleased to see a group of workers standing up for what’s right.

After I’d done the collection I e-mailed other stewards in the council. Two more did collections that day, so I was able to take down over £220 to the Gate Gourmet workers the next day, along with messages of support from our stewards committee and branch chair.

Another couple of stewards have also started collecting, so now we have raised over £400.

About £150 was raised for the sacked Gate Gourmet workers at the group executive committee meeting of the PCS civil service workers union in the Department for Work and Pensions last week.

Collection sheets have been sent to members of the Left Unity group in London.

A collection among journalists at the Rotherham Advertiser raised £25. The multiracial nature of the action by Gate Gourmet and BA workers made a strong impression on people.

The branch executive of my T&G/Acts branch in Sheffield has agreed that our next branch meeting will be a public meeting in solidarity with the Gate Gourmet workers. We are proposing that the branch donates £5,000 to their hardship fund.

Oxford Brookes University Unison branch has given £200 to the hardship fund.

A small meeting of Haringey TUC, north London, raised £17.50, with another £50 being donated from funds.

I collected £75 in a small probation office in Sheffield from Napo and Unison union members. Not a single person refused to give, including low paid clerical workers.

A couple of us in Tower Hamlets Respect collected £10 by going round the shops and stalls in Watney Street market.

We also gave out a statement from our local MP, George Galloway, supporting the Gate Gourmet workers.

I collected £19.50 from PCS union members in the ODPM Watford. Members also voted to ballot for industrial action if two colleagues are made compulsorily redundant.

The vote was solid and may have been influenced by the Gate Gourmet workers’ example.

A delegation from Watford trades council visited the picket line last week. We handed over £45. We marched up with our banner, which we have left at the picket for the duration. I was given the megaphone as soon as I arrived and made a speech.

A collection among PCS members in Brent, Harrow and Hillingdon has raised £50.

I’m a tube driver based at Edgware Road depot, the one that was hit hardest by the recent bombings.

We took round a collection sheet, and within a few hours we’d collected over £200.

Everyone supported the sacked workers. People are disgusted by the way they’ve been treated. I’ve never heard such universal support for a group of workers.

The TSSA rail union has sent a message of support to the Gate Gourmet workers. The union is also sending a letter to the T&G noting the brave stance taken by BA workers.

Last summer a group of workers resisted a greedy boss who engineered a dispute in an effort to undermine working conditions.

They were steel erectors at the massive Wembley stadium development.

They defied the anti-union laws — and won.

We did a collection on Thursday of last week at the Wembley stadium site.

We collected £52.14 (and half a euro). One of the steel erectors who recognised us from their own dispute took half a dozen collection sheets in with him.

We took the money together with just over £50 collected at our Socialist Workers Party meeting to a Gate Gourmet support meeting. Regular collections are now underway.

I went round York council offices and collected £16. We are also asking our Unison union branch for a substantial donation. 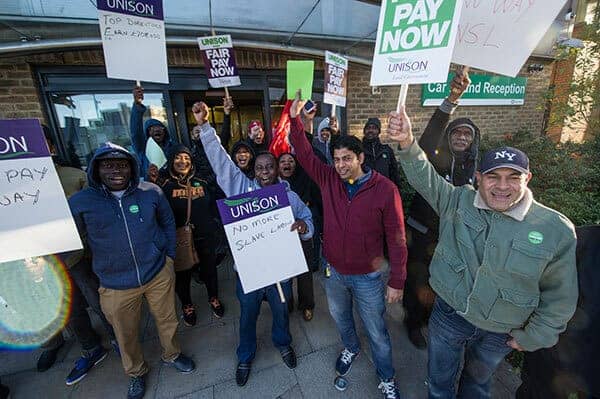 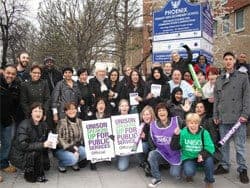