Solider’s mum: ‘Gordon Brown has blood on his hands’

This article is over 12 years, 5 months old
Danni Hamilton’s son is in the British army. He has now been given battle orders to go to Afghanistan. She spoke to Socialist Worker about why the troops should be brought home:
Downloading PDF. Please wait...
Tuesday 18 August 2009

Danni Hamilton’s son is in the British army. He has now been given battle orders to go to Afghanistan. She spoke to Socialist Worker about why the troops should be brought home:

‘When I heard my son was being sent to Afghanistan I was so despondent—it’s just one conflict after another, there seems to be no strategy.

We didn’t do much good in Iraq. When my son got back from serving there he said that it’s even worse there now than before the war.

I really can’t see why we’re in Afghanistan. I think it’s just because Tony Blair wouldn’t stand up to George Bush. But they are both gone now and our families are still paying the cost.

I know we’ve had terror attacks here—but I wonder how much is of our own making.

Anyone who has got a loved one out there lives their life around the war—it affects all of us.

We are going to lose a generation of youngsters. If the politicians had children going out there, I wonder whether it would make them think twice.

Our sons and daughters keep dying because the politicians haven’t got the bottle to say we should leave.

We should bring the troops out of Afghanistan before any more die or are injured.

Gordon Brown should remember that Iraq was Blair’s swansong. Afghanistan will be his. Brown won’t be able to shake this off—he will have the blood of the soldiers on his hands.’ 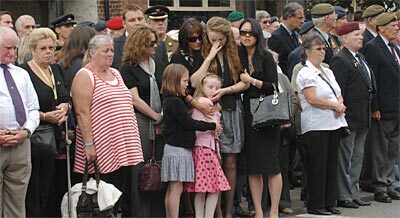