This article is over 13 years, 0 months old
Ministers are mired in expenses corruption as thousands of people lose their jobs and homes
Downloading PDF. Please wait...
Tuesday 02 June 2009

Gordon Brown’s government is in deep crisis. Reports of various cabinet ministers expected to stand down or be “reshuffled” out of their jobs were mounting by the hour as Socialist Worker went to press.

Eight Labour MPs have already said they will not stand for re-election.

The fact that chancellor Alistair Darling, one of Brown’s closest allies, is one of those expected to lose his position shows how serious New Labour’s crisis has become.

The immediate spark for this crisis is the expenses scandal.

But the roots go much deeper – to Labour’s abandonment of ordinary people and worshipping of the market and big business.

Darling and transport secretary Geoff Hoon have said “sorry” after being caught overclaiming expenses on their “second homes”.

But not one minister has apologised for the disastrous policies that have brought such misery for ordinary people.

Darling is the man in charge of Britain’s failing economy. Where is his “sorry” to the 850 Hewlett Packard workers who have been thrown on the dole this week in Scotland?

Geoff Hoon was defence secretary at the time Britain waged war on Iraq, but has not apologised for the bloody war.

Gordon Brown is staggering on as prime minister but the responsibility for the mess New Labour is in rests with him.

Brown and Tory leader David Cameron offer no hope to the millions facing poverty and unemployment.

We need a national fight to save jobs and an alternative to this stinking political system. 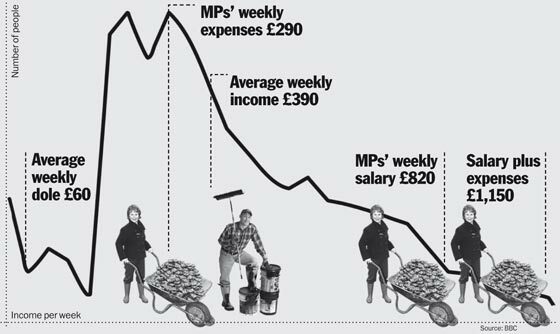