They have struck for two and half days against attempts to remove enhanced Saturday pay—an average pay cut of 10 percent.

The low paid workers rejected the offer of one year’s enhanced Saturday pay by 67 percent.

The 69 percent turnout was higher than both the indicative and industrial action ballots and was undertaken in just one week.

The union has announced another one-day strike in libraries, elderly people’s homes and among traffic wardens on Saturday of this week.

But workers at Vinney Green secure unit are escalating and were set to begin a three-day strike on Tuesday of next week.

South Gloucester Unison branch secretary Huw Williams said, “Recruitment to the union has shot up during the dispute. Union membership has doubled to 90 percent in some workplaces.

“We have more union stewards now. The strike shows how a fight can mobilise workers in small sections.

“Workers are amazed at all the solidarity messages and donations they have received so far. It has raised their confidence.” 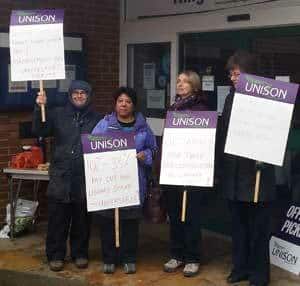