Around 400 parents, teachers and students protested outside the gates of the Winterbourne Academy in South Gloucestershire last Saturday. Even the leader of the council was present.

The new CEO resigned in unexplained circumstances and a £1 million deficit was declared. Now other academy trusts are looking to take over.

School NUT rep Lee Everson said, “This scandal shows how academies were a bad idea from the start. There is no meaningful government oversight of the finances until a crisis hits and no local accountability.

“The people truly responsible for allowing this mess to occur have long since left the scene.”

He said teachers would pay the price as contractually-owed pay increments and a 1 percent living standards award have been suspended.

And parents and children face “instability and worry” over the future of their school. But he added that there has been “fantastic solidarity” among workers, students and parents.

The protest followed a 300-strong public meeting of Winterbourne parents and students on Tuesday of last week.

The meeting felt things were being rushed through and people have concerns about being taken over by a big national trust.

Some felt the financial situation was allowed to escalate to create a crisis.

At the meeting parents and students raged about secrecy, lack of control and accountability.

Parents asked, “Why can’t schools be run by local authorities?”

Nigel Varley, South Gloucestershire NUT joint divisional secretary, said, “I rarely get excited nowadays but the meeting was one of the most remarkable I have been to.”

A delegation plans to lobby the education secretary in London in the next two weeks.

Support the campaign by signing a petition at bit.ly/2gOaKm8 and go to saveourschooltrfwia.com for more details.

They are fighting for the same flat rate £450 pay rise given to lecturing staff for 2016.

Bosses offered a divisive pay deal that would have given some workers more than others. Unfortunately union officials suspended a national walkout to ballot over it.

With such a resounding rejection the union should now escalate action to focus the employers’ minds.

Union officials have a clear mandate to lay out a strategy to win.

There should be no more suspensions of action until workers get the same pay rise as lecturers. 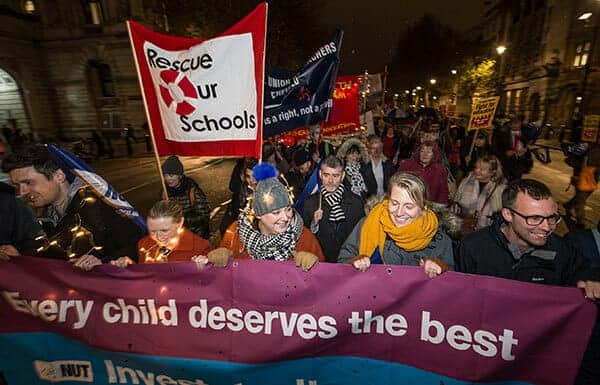