This article is over 11 years, 11 months old
Firefighters in South Yorkshire are set to strike for ten days—reigniting their fight against threats of mass sackings.
By Tom Walker
Downloading PDF. Please wait...
Tuesday 19 January 2010

Firefighters in South Yorkshire are set to strike for ten days—reigniting their fight against threats of mass sackings.

The firefighters, members of the FBU union, are to strike from Sunday morning until Tuesday morning, and then for eight days from 27 January until 4 February.

The action comes as bosses threaten to sack all 744 firefighters if they refuse to accept shift changes.

South Yorkshire firefighters struck in October last year against the sacking threat, which was eventually withdrawn for talks.

But now bosses are trying to impose the new shifts again, saying any firefighter who does not sign a new contract will remain dismissed.

The union pledged the extra eight days of strike action after bosses refused to withdraw their threat to sack workers.

Bosses confirmed this week that one firefighter has already been sacked—for allegedly posting comments about the strike on Facebook.

And six more are facing disciplinary action for chatting on the social networking website.

Acting FBU brigade chair Graham Wilkinson said, “We see this as management harassing and intimidating firefighters purely because of the strike action.”

The sacked firefighter has launched an appeal.

Union activists also believe that shifts are being rearranged to keep them away from other firefighters.

“Everyone’s pissed off with the latest developments—but we’re resolute,” said one Sheffield firefighter.

The new strikes are the latest phase of a long-running campaign, which has so far seen a national march and seven days of strike action.

Up to 1,800 firefighters marched in Barnsley last September under the slogan “Let me be a parent and a firefighter”—raising the issue of what the shift changes will mean for childcare.

At the rally, South Yorkshire firefighter Garry told Socialist Worker, “The new shifts mean that instead of nine-hour days and 15-hour nights, we will be working 12-hour day and night shifts.

The last round of South Yorkshire strikes in October became a national focus for the union—the biggest set-piece battle since the national strike of 2002-3.

Solidarity poured in from across the country. And that is what we need to see again.

Firefighters should pass motions in their union branches demanding that the national conference is recalled immediately—and refuse to allow South Yorkshire to fight alone. 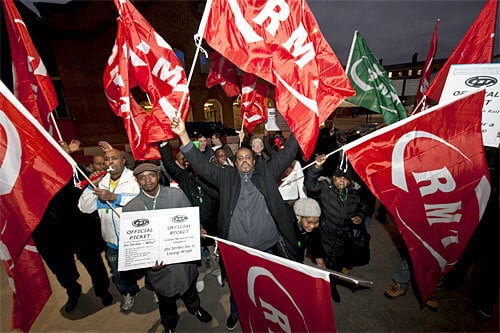 London Underground cleaners set to strike on Friday and Saturday

Lecturers' union must keep up the fight