Workers won more than many other groups are achieving, because they fought hard. But it is still effectively a pay cut
By Sam Ord
Downloading PDF. Please wait...
Tuesday 18 January 2022

Workers at South Yorkshire Stagecoach have ended an all-out strike after accepting a pay deal.

Some 550 members of the Unite union began striking indefinitely earlier this month after a below-inflation pay rise, which followed a pay freeze.

But they voted to end the strike after bosses offered 10.7 percent over two years—covering February 2021 to May 2023. This is more than many are achieving, because they fought hard.

But in reality the increase is some 5 percent for each year of the deal. With inflation running at over 7 percent, that’s effectively a pay cut.

Strikers fought with great determination. They began with two week-long strikes towards the end of last year, then quickly escalated to all-out action. This is significant and rare compared to other Unite and Stagecoach disputes. But Unite union officials undermined the action.

Firstly Unite dropped the demand for an equal rate of pay across depots in Sheffield, Barnsley and Rotherham.

This ended in the union suspending action by workers in Rotherham and Barnsley to consider an offer, leaving those in Sheffield to fight alone.

Also Unite suspended a strike of 400 workers on Cambus, in Cambridge, a subsidiary of Stagecoach. The strikes should have joined to hit the bosses harder.

The fight helped to grow the union’s strength—membership grew from 27 to 150 workers in the build up to the strike. And big picket lines showed workers’ determination throughout the indefinite action, with lots of solidarity from members of other unions.

The action had the potential to win a genuine pay rise.

Around 300 workers at First Manchester busses were set to strike for three days between Tuesday and Thursday of this week.

The members of the Unite union are fighting after bosses refused to backdate any pay increase to August 2021. August is the month when the annual pay increase was due.

The revised deal will come into effect on 31 January, two months before the usual anniversary date for pay rises. NCT drivers are now some of the highest paid drivers outside of London. 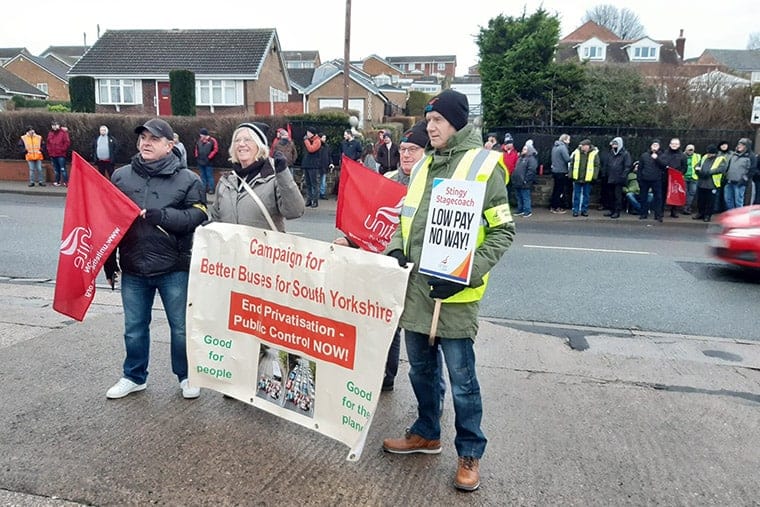