This article is over 11 years, 0 months old
Up to 1,000 council workers held a mass meeting and march against cuts in Southampton yesterday (Thursday).
By Guy Smallman and BobNoyes in Southampton
Downloading PDF. Please wait...
Friday 21 January 2011

Up to 1,000 council workers held a mass meeting and march against cuts in Southampton yesterday (Thursday).

The Southampton council workers packed into a church hall for a joint meeting organised by the Unite and Unison trade unions.

There was huge anger at the cuts proposed by the Tory-controlled council.

The council wants to force through the equivalent of a 5.4 percent cut in pay, including a 1 percent across-the-board pay cut, a freeze on previously agreed increments and other cuts to conditions.

After brief presentations by reps from both unions the floor was opened up for the members to have their say.

One worker suggested occupying the council chamber, with hundreds of people forcing the council to abandon its meetings voting through cuts. This went down particularly well.

A motion was then passed unanimously to reject the council’s proposals and organise a mass lobby of the council’s budget-setting meeting on 16 February.

There then followed an angry march to the Civic Centre, where there was a rally with speakers from the Unite, Unison and UCU unions and the NUS.

Daniel Prendagast, president of Solent University students’ union, told the rally that despite the recent votes in favour of increasing tuition fees and scrapping EMA, students would step up their fight against the government.

The march and rally was lifted by a large and militant contingent of cleaners from Southampton General Hospital, who struck last month against their employer, the multinational contractor Compass Medirest.

Unison rep Jo Spears told the rally that for one of them to earn the same money as the company CEO’s annual wage, they would have to work for 275 years.

The unions agreed at the meeting that if the Tory council tries to impose the cuts, they will hold an industrial action ballot. 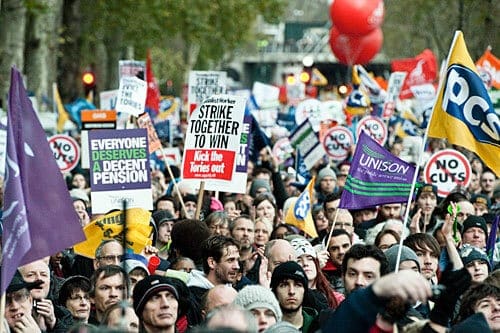 We need to nurture the organised resistance to the Tories