This article is over 10 years, 11 months old
Outrage at cuts boiled over yesterday as council workers stormed the meeting where Southampton council was setting its budget. More than 400 workers held a noisy and lively protest in front of Southampton Civic Centre.
By BobNoyes
Downloading PDF. Please wait...
Thursday 17 February 2011

Outrage at cuts boiled over yesterday as council workers stormed the meeting where Southampton council was setting its budget. More than 400 workers held a noisy and lively protest in front of Southampton Civic Centre.

Protesters booed and jeered at Tory and LibDem councillors as they went in. Council workers shouted, ‘Cut our pay—lose your seat in May’. Demonstrators from council run services including libraries, administration and the cleansing depot, were joined by school support staff and allotment holders.

The council has threatened to cut pay by 5.4 percent for those earning over £17,000. Among other cruel cuts are plans to cut subsidies to allotments which will hit pensioners hard.

But it was the pay cut that angered most people—and the way it was announced on the same day as the CPI level of inflation hit 4 percent. With the real cost of inflation much higher, this amounts to a cut of nearer 10 percent for many workers.

About 50 demonstrators managed to storm into the building, despite attempts by security to shut them out (see photos). Protesters banged on the doors of the council chamber. Eventually the mayor ordered the public to be removed from the public gallery to stop the shouts of “Shame on you”, “No pay cuts” and “Same old story, same lying Tories”.

The council tried to include school support staff in its cuts, but school governors across Southampton threw out the suggestion and refused to cut the pay of staff who are already paid only for term times. Only one school supported the council.

Council workers in the Unite and Unison unions are being balloted for industrial action should the council carry out its threat to sack all staff and re-employ them on the new terms. 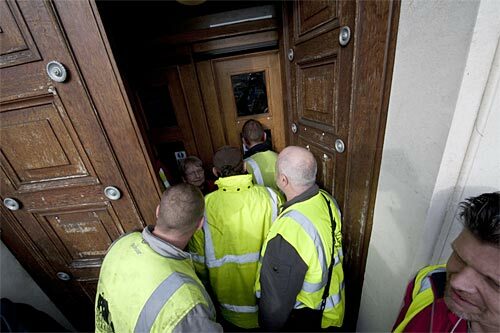