THE TORY Popular Party romped home in Sunday’s election in Spain. It stayed in office, winning 44.5 percent of the votes, as against 34 percent for the PSOE Socialist Party and 5.5 percent for its Communist – led United Left ally. This was a blow to the Socialist/United Left alliance, which had hoped to repeat the successes of the “Plural Left” alliance in France. But two million Socialist Party and one million United Left voters simply stayed at home-so the Tories won.

The abstention of left voters is a product of the Socialist Party failing to campaign seriously against the Tory government for the last four years. The morale of ordinary Socialist Party activists will also have been hit by the behaviour of the party apparatus. A couple of years ago the party membership voted by 60 percent for a new leader from the left of the party. The apparatus ensured he was replaced by the “moderate” Almunia, who was supposed to be more appealing to undecided voters. On Sunday Almunia admitted, “We have been unable to motivate left wing voters, even though they are the majority in society.” 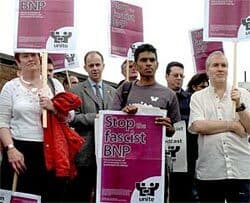 Join the protest to stop the Nazi BNP