SEFTON COUNCIL in Merseyside is planning to close down seven social service centres, including four homes, a respite centre, a school for children with disabilities and a family centre.

Around 1,200 UNISON union members working in the council are due to begin balloting for strike action against these cuts. Seventy service users and family members attended a public meeting against the closures last week.

THERE IS a big mood for strike action by medical secretaries, and administrative and clerical staff working in the NHS in Scotland. These workers are among the lowest paid staff in the NHS.

All out for union

MEMBERS OF the TGWU union at the Dynamex Friction Dynamics (formerly Ferodo) plant in north west Wales have launched an all-out strike. The workers are fighting against the effective derecognition of their union by factory boss Craig Smith.

FOLLOWING A hard fought campaign by tenants and the Socialist Alliance, a proposed ballot for transfer of council houses into private hands has been dropped by the New Labour controlled Exeter City Council. The council spent 250,000 preparing the way for the ballot.

However, during the pre-ballot consultation 75 percent of tenants did not support the privatisation of their council homes. This victory means that Exeter is the only council where such a proposal has failed to reach the ballot stage.

New Labour council leader Roy Slack admitted, “The depth of the feeling shown during the consultation has made it very clear what the outcome of the ballot would be, and I think we should call a halt now.” This victory should encourage people up and down the country.

SOME 50 MPs have now pledged their backing to the Manifesto for Council Housing. Tenants’ strong opposition to New Labour plans for stock transfer of council homes to housing associations and private landlords, has led a growing number of MPs to back the campaign. 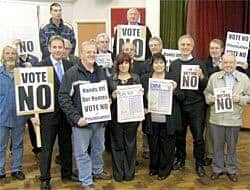