Spectre of Vietnam haunts US in Iraq

This article is over 18 years, 5 months old
Increasing resistance and deep discontent within the US army - Iraq looks more like Vietnam every day
Downloading PDF. Please wait...
Saturday 26 July 2003

Tens of thousands of protesters marched against the US occupation of Iraq in Najaf last weekend. They chanted slogans such as ‘No Americans after today’, ‘No to America. No to colonialism’ and ‘Down with the invaders’.

The march was in anger at a massive increase of US troops in the streets, the flying of Apache helicopters over the town and the encirclement of the home of a Shia Muslim cleric, Muqtada al-Sadr. He had attacked the US and British occupation, and the new governing council of Iraq.

One Shia cleric told demonstrators, ‘Saddam killed us and pushed us into prison. Now the Americans are doing the same.’ The US has admitted that its troops face ‘guerrilla-type’ attacks in Iraq. General John Abizaid, the head of US Central Command, said the US ‘was still at war’. The US Intelligence Committee reported last week that ‘large numbers of US troops were likely to remain in Iraq for years’.

US soldiers are now being killed almost on a daily basis. Officially 39 US soldiers have been killed since Bush declared the end of the war on 2 May. That brings the total number of US soldiers killed since the start of the war to 153 – more than in the 1991 Gulf War. Most estimates put the figure even higher. According to the Iraq Coalition Casualty Count website, which collates figures based on military sources, the count of all US troops dead is 85 since 2 May.

And according to journalist Robert Fisk in the Independent, ‘The US is admitting only a fraction of the attacks in the country against its forces.’ He claims the US has failed to report a mass of attacks against US patrols in and around Baghdad. Fisk says US security documents mention ten ‘security incidents’ in Baghdad alone in a 48-hour period and the use of ‘improved explosive devices’ against US forces.

PRESIDENT BUSH chillingly restated threats against Iran and Syria on Monday. He accused them of continuing to support terrorism, said their behaviour was ‘completely unacceptable’ and warned they ‘will be held accountable’. 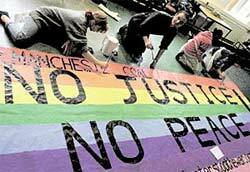 The war will be an issue at the election

Israel’s threat to Iran pressures US

George Bush will still be boss in 'free' Iraq