Spirit is strong 20 years on

The gala attracted a massive turnout of banners and contingents from former mining villages. Also attending were trade unions and campaign groups, including Respect and Unite Against Fascism.

The popularity of Socialist Worker’s miners’ strike special testified to the gala’s spirit. Some 300 copies were sold in the first two hours of the event.

The loudest applause went to Bob Crow of the RMT. He gave a barnstorming speech calling for working class action and solidarity.

WORKERS ON Metrobus in Crawley, Orpington and Godstone were due to strike on Friday of this week over pay.

The planned action is the first in a series of one-day strikes called after workers overwhelmingly rejected a 2.5 percent pay offer.

“Drivers are doing 80 and 90 hours a week behind the wheel to get a decent wage,” said one Metrobus worker.

“It’s the credit card trap. It means people making up today’s wages with tomorrow’s money. We need a better rise.”

The TGWU union has put out a leaflet warning people that they could be sacked if they aren’t in the union and refuse to cross a picket line.

The bus worker questioned this strategy: “Why don’t they put it the other way round? Join the union and we’ll protect you!”

…as Arriva votes for action on pay

BUS WORKERS at Arriva North Western and Wales have voted for strikes over pay in a workplace ballot by 1,255 to 420.

We are now requesting that the TGWU, our union, moves to an official ballot. The union joint negotiating committee will meet a week on Sunday.

Our union officials seem reluctant to move to an industrial dispute. But that is where we are probably heading, given the feeling among members.

This is an important battle for every bus worker and for the TGWU. Arriva’s operation in the north west of England is its biggest outside London.

We are looking to build up the mood for action and win support from other workers. It’s not just about pay—we’ve had enough of the pressure of work.

Keeping up the local pensions links 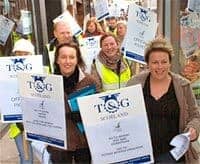