SSP get set for Livingston by-election

This article is over 16 years, 4 months old
Robin Cook's death means there will be a by-election — the first since the general election — in the Scottish constituency of Livingston.
By Neil Davidson chair, Livingston SSP branch
Downloading PDF. Please wait...
Saturday 10 September 2005

Robin Cook’s death means there will be a by-election — the first since the general election — in the Scottish constituency of Livingston.

The Scottish Socialist Party (SSP) is mounting a national mobilisation to maximise its vote.

For decades Livingston has effectively been run as a one-party state with Labour dominating the local council and holding seats in both the British and Scottish parliaments.

Among the major issues facing voters in Livingston are the building of a private prison in nearby Addiewell, the moving of important acute services from St John’s hospital to Edinburgh, and the reduction of local fire services.

On top of all this, the important question of the war and civil liberties refuses to go way.

Labour has picked Jim Devine, Cook’s agent, as its candidate.

Devine is a full time official with Unison and has clearly been chosen for his association with Cook and because he is perceived to be on the left.

The SSP will be pointing out to voters the contradiction between Unison’s opposition to the war and privatisation and Labour’s support for them.

Steven says, “We think that the problems of war and globalisation raised by the tremendous Make Poverty History and G8 demonstrations are as important to voters as local issues like health and the fire service.”

Four of the SSP MSPs are currently being excluded from the Scottish Parliament because of their protests over repressive policing at the G8 summit.

They will all be in Livingston for the campaign.

The SSP is kicking off the campaign this Saturday. To take part gather at Craig’s Farm, Craigshill, Livingston at 12 noon. 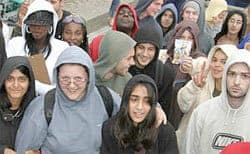 Step up fight after the five-day strike