St Aloysius teachers fight for a school fit to teach in

This article is over 11 years, 6 months old
Teachers at St Aloysius school in Islington escalated their fight for a school fit to teach and learn in with a two-day strike on Tuesday and Wednesday of this week.
By Ken Muller, assistant secretary, Islington NUT (pc)
Downloading PDF. Please wait...
Tuesday 20 July 2010

Teachers at St Aloysius school in Islington escalated their fight for a school fit to teach and learn in with a two-day strike on Tuesday and Wednesday of this week.

St Aloysius is in the process of being rebuilt by private contractor Balfour Beatty under the Building Schools for the Future programme.

But teachers say that new buildings are unsafe and want the old ones retained until safe ones are built.

They showed that the school had been requesting, for over a year, a “variation” of the building contract so that Block B could be retained as its “preferred option”.

Instead Balfour Beatty is set to demolish Block B.

So, despite the abuse school management has heaped on striking teachers, management and teachers have been asking for the same thing.

The Lib Dem administration refused the school’s request. It is now down to the newly elected Labour council to reverse this decision and put pressure on Balfour Beatty to drop their penalty charges and halt the demolition.

If they fail to do this, and the demolition of Block B goes ahead over the summer holiday, the NUT is committed to calling more industrial action. We want a school fit for purpose when the new autumn term starts in September.

They are fighting job cuts and changes to their working practices.

The action follows two days of strikes the week before.

Chris Keates, general secretary of the NASUWT, said that the union had put forward a number of compromises to resolve the dispute, all of which had been rejected.

She said that workers faced “an uncompromising and unreasonable stance” at the school and had “no choice” but to strike.

Derek Moore, an NASUWT executive member, said, “It is unfortunate that the school governors appear to have washed their hands of dealing with the problem.

“A culture of intimidation and a refusal to engage effectively in the process of industrial relations have brought morale at the school to an all time low.” 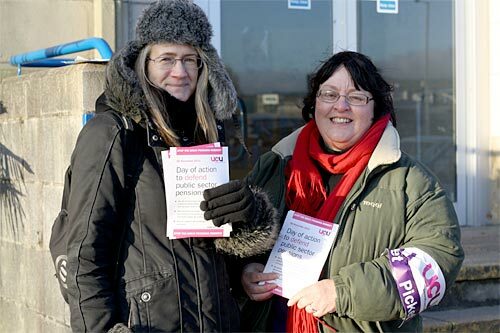