This article is over 15 years, 3 months old
The government’s attacks on Muslims have led to a series of racist attacks across Britain, but there is also resistance and signs of a new fighting unity between Muslims and non-Muslims.
Downloading PDF. Please wait...
Saturday 21 October 2006

The government’s attacks on Muslims have led to a series of racist attacks across Britain, but there is also resistance and signs of a new fighting unity between Muslims and non-Muslims.

Some 70 people gathered at an hour’s notice last Saturday, in Dudley, West Midlands to oppose the Nazi BNP and defend the right of the local Muslim community to build a new mosque.

Around 30 fascist supporters had earlier turned up to use the opportunities created by ministers’ comments to boost their Islamophobic campaigning against the mosque.

The mosque contacted Unite Against Fascism and together they held a protest to show their determination to keep the BNP out of Dudley.

A major rally is now planned for Sunday 29 October to stress mutual respect between people of different faiths and ethnic backgrounds, the rights of anyone to practice their religion and the need to stop the fascists.

In Glasgow anti-racists will gather this Saturday for a Unite Against Islamophobia rally called by Glasgow Stop the War Coalition and the Muslim Association of Britain.

It follows an attack in which a 53 year old imam was punched and kicked by a man who entered a mosque in the west end of Glasgow.

After the incident, at the Dawat ul Islam centre, Mohammed Shamsuddin was taken to the nearby Western Infirmary.

Witnesses to the attack said the suspect verbally abused Imam Shamsuddin before punching and kicking him and then hitting him with a chair and other office equipment.

The assault follows a firebomb attack on an Islamic centre in Falkirk.

Meanwhile in Leicester two young men have appeared in court charged in connection with a brutal attack on two Asian men.

The alleged attackers, who are both 17 years old, were jointly charged with two counts of wounding with intent to cause grievous bodily harm.

A 22 year old Asian man was critically injured in the attack, which occurred on Saturday 7 October. Another man, also 22, needed hospital treatment.

The pattern of recent attacks is clear: 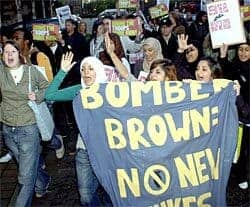