Start the fight to save jobs at Linamar

Over 200 workers at the Linamar car components plant in Swansea are facing the dole. Bosses announced closure plans last week.

It’s crucial that everyone rallies round a fightback to save the jobs.

Bosses may offer what look like big cheques to accept redundancy. But it will be very hard for workers to find new jobs in the area as the economic crisis grows.

And even a cheque for tens of thousands of pounds soon disappears when you’ve got no money coming in.

The plant has been open since the 1960s.

It was previously owned by Ford and then Visteon before being acquired by the Canada-based Linamar Corporation in July 2008.

Rob Williams, Unite union convenor at the plant, says, “We are totally opposed to the closure of the plant. The redundancy deal on the table could be as much as £11 million.

“We believe it would be far better to use that money for investment and to keep people in jobs.”

Linamar tried to get rid of Rob – a socialist and noted trade union activist – last year.

It was blocked by unofficial action when he was first sacked, and then the threat of an all-out strike after there was a thumping majority in an official ballot.

The Unite union’s Welsh regional secretary, Andy Richards, said that the union would do all it could to keep it open. It will take serious resistance to stop Linamar.

Workers occupied their plants at the factory’s Visteon sister plants in Belfast, Enfield and Basildon last year when bosses imposed closure on them.

In that case there was no redundancy money on offer. This time there is.

But the methods that won at Visteon need to be used again.

That means not only hard-hitting action, such as an occupation, at the Linamar plant, but also spreading the struggle to Ford plants – particularly at nearby Bridgend.

It was the threat to picket out Bridgend that forced Ford bosses to offer ­redundancy ­payments to workers at Visteon.

A battle by Linamar workers would be a focus for all those who want resistance to cuts, closures and job losses.

Activists everywhere need to help build the confidence of Linamar workers to fight: 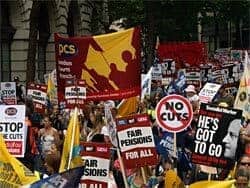 SWP party council: Fighting on all fronts can help create an alternative