Step up fight for refugees

Step up fight for refugees

NEW LABOUR’S policies towards refugees were intended to send a message to those fleeing persecution, war and poverty-do not come to Britain.

That is what lay behind the introduction of vouchers, forced dispersal, detention and deportation of refugees.

Labour has strengthened the fortress around Europe and Britain. The Home Office sent British immigration officers to Prague airport to stop Czech and Roma people coming to Britain.

Czech TV showed a Roma journalist who was destined for the same London address as his female colleague being prevented from coming to Britain.

Protests in the Czech Republic then forced the Home Office to withdraw the “pre-clearance immigration controls” at Prague airport.

Asylum seekers are not just victims. They are determined to find a better world. Campaigns against the voucher scheme have forced David Blunkett to consider replacing them, although not with cash benefits.

Now is the time to step up the campaign in support of asylum seekers to force through a real change in government policy. One place to do that is on the protest outside the Labour Party conference in Brighton.

Make sure the message is really clear-asylum seekers are welcome here!

Bosses do not have 24-hour poser over us

I WELCOME the decision of the employment tribunal which ruled that Tom Doherty was unfairly dismissed following his alleged involvement in football violence in Copenhagen.

I was one of the people who went on strike in protest at Royal Mail’s decision to sack Tom. We took industrial action because we felt that whatever an individual does outside of his/her working hours is no concern of Post Office managers!

Tom was not arrested or convicted of any offence. This is a precedent for all workers-they are not accountable to their employers 24 hours a day.

Our deposed union chairman, Mick Doherty, is also going before an employment tribunal following his dismissal for similar reasons.

I know I speak for all his colleagues in wishing him all the best. I hope his case reaches the same conclusion as Tom’s.

I WAS deeply shocked by the article in Socialist Worker (28 July) concerning the horrific deaths of two bakery workers who were instructed by their bosses to enter and clean ovens which were still raging furnaces.

As a consequence of penny pinching (bosses were unwilling to pay 2,500 to employ specialists) the workers burned to death.

There was no mention of this on the front pages of the national newspapers. Contrast this with the photographs in most of the daily papers of Prince Charles lying unconscious after falling from his horse whilst playing polo.

We live in a sick society where the agonising deaths of two men are considered less important than a minor bump on the head of the future king.

Around 300,000 people gathered to express their anger against this undemocratic institution.

What hypocrisy that eight men can make decisions that affect the whole population of the planet.

No wonder we hear the slogan “This is what democracy looks like”.

In issue 1758 Andrew Kernon was referred to as a “schizophrenic man”. A better description would be “a man with schizophrenia” as people with this illness are more than just the experience.

In issue 1760 there is a cartoon which says, “Why do I always have to sit next to the nutter?”

Insulting words such as those mentioned are often used as powerful tools to disempower and maintain negative images often applied to mental health service users.

The UK pension system is worse for the average worker than the World Bank model, the US system or the rest of the EU.

The TUC now supports stakeholder pensions. These will not give low or even median paid workers a pension above means-tested levels.

Between international anti-capitalist events we could do a useful job in defeating Gordon Brown’s pension system and stakeholder pensions.

THE NME music magazine had a brilliant article at the end of July about racism in Britain that every anti-racist should read.

Journalists travelled to the “racial hot spots” round the country, where they interviewed Asian and white teenagers about whether they thought we really do live in a divided Britain.

NME showed pictures of Asian and white kids hanging around together, and of teenagers handing out leaflets for an Anti Nazi League rally. The article showed that black and white people can live and fight the real enemy, the Nazis, together.

As Nilpa from Southall says of the situation, “The Asians get the bad press, while the real problem, racism and discrimination, gets totally forgotten.”

IN COMMON with many working class women I left school early and married young. I always thought that one day I might be able return to education.

In September 2000 I began a one year access course at Greenwich Community College.

I applied to the University of Greenwich and was offered a place. I discovered in March that under a new ruling I was deemed “too old” to apply for a student loan. I am 55 years old.

I have written protest letters to ministers, MPs and Tony Blair saying that New Labour’s commitment to social inclusion and lifelong learning seems rather hollow to me.

I have overcome so many obstacles to reach this point in education, I cannot give up now.

THE FOUR workers at the New Diamond restaurant in London’s Chinatown joined a union for their rights.

Three weeks later they were dismissed. Some of them worked there for over ten years. What did they get in return for their hard work? The New Diamond employers only care about their profits. The workers there are paid wages below the national minimum wage.

Since the loss of their jobs the TGWU union has backed them in their demands for reinstatement. All trade unionists, whether Chinese or English, supported the New Diamond workers’ fight for their rights.

Under consistent pressure from working people the employers finally agreed to compensation on 27 July.

This is the greatest victory in fighting for workers’ rights in Chinatown! This victory has great significance. 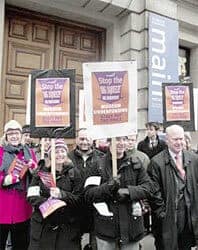