ANGER AND dismay have greeted the threat to 3,200 jobs at the Motorola mobile phone plant in Bathgate, Scotland. People queued up to sign a Scottish Socialist Party petition last Friday and Saturday in Livingston, near Bathgate, against the threats to close the plant announced last week.

“I think they’ve stabbed us in the back,” said Steve Haren, a Motorola worker for eight years. “We’ve been a loyal workforce. Motorola is to blame for this. Motorola’s chief executive, Chris Galvin, is reportedly on $11 million a year, yet he can just sign the death knell on the workforce. It’s fear and intimidation with the big companies. Motorola’s the bully, and we’re the victims in the playground.”

“The capitalist system doesn’t take into account human wellbeing,” John Ridgman, a Motorola worker of six years, said. “Human priorities come well down in the system. Blair is just making the capitalist system work. If jobs go as a result of this it is because we are not organised enough.”

This is just one of a series of massive layoffs to hit the area in the last two years. Dak Simpsons, Levis, the clothes factories for Marks & Spencer and others have pulled out of the area.

“If Motorola do go ahead with this closure then the area would be devastated,” said D Williams. “As well as the 3,200 jobs at the plant, there are hundreds of other jobs that would be lost in the local community from the loss of wages. It doesn’t seem so long ago now that the politicians were beaming about how these new high-tech industries would save Scotland from being a wasteland. Well now is the time for them to put up or shut up.”

Yet Wendy Alexander, enterprise minister of the Scottish Executive, could only tell the workers that Scotland should look for another niche market. Many Motorola workers have complained of a culture of fear at Motorola.

Motorola is actively anti-union, and has called the police in to remove ISTC union area officials from the grounds as they have attempted to unionise the plant. Despite this, about 10 percent of the workforce are members of the ISTC.

At a meeting called by the ISTC on Saturday around 50 people, mainly Motorola workers, turned up to voice their concerns at the threat of closure. “This is the first year Motorola have announced losses,” said Alan Pottage, an ISTC organiser. “For ten years they’ve enjoyed profits year after year off the backs of the workers. Now’s the time to invest that profit back into the workforce. On Wednesday, when the job losses were rumoured, Motorola shares went up, not down. The shareholders are still making profits. Our message is, hands off Motorola jobs!”

The message from the ISTC members was clear-that they want to fight all job losses, and that activists must build the union and resistance.

THE announcement by Marconi, the telecoms equipment maker, last week that 1,500 jobs were to go in its British plants came as a shock to most people. Workers cannot understand why a company that is expected to make around 800 million profit this year, and is proposing to enter a period of expansion, can at the same time make workers compulsorily redundant.

Even my own line manager seemed genuinely shocked. We had a company section meeting, and it was asked how we could fulfil the required work plans when we are already over-stretched if we are faced with such a reduction. The manager just could not give an answer.

Recently some trade union representatives in the MSF union in the Coventry plant began to fear something big was on the way. We started a union recruitment campaign during which more people joined the union in one week than in the previous year.

Activists in both Liverpool and Coventry are beginning to talk about having a demonstration outside Marconi’s office in London. National union officials and shop stewards from across the country in the MSF met last week to discuss the announcement of the job cuts.

WORKERS AT the Marconi plant in Wavertree, Liverpool, were furious at the announcement of layoffs last week. Only last month over 1,000 workers walked out over the dismissal of 26 workers. All 26 were reinstated.

Unions were kept in the dark about how many jobs were threatened until the company had told shareholders the details of its plans. Even as national union leaders in Birmingham were being told that details were still not available, the company was releasing information to MPs and the Chamber of Commerce in Liverpool.

Anger in the local MSF union branch which covers the Marconi plant was particularly aimed at the local Labour MP, Jane Kennedy. Ever since rumours began to circulate that redundancies were on the horizon the MSF committee had repeatedly written to Kennedy and phoned her office to invite her in to speak to the workers at the plant.

She has never once responded. It has recently come to light, however, that she had been to meetings with company management on a number of occasions. Workers at the plant are asking the question, “Whose side is Labour on?” The committee recently invited the Wavertree prospective parliamentary candidate for the Merseyside Socialist Alliance into their meeting to speak.

ON WEDNESDAY of last week the shipbuilders Cammell Laird, which has a workforce of 2,500 in Birkenhead, Merseyside and Tyneside, called in the receivers, threatening the future of all those jobs.

The announcement comes after the loss of 450 jobs since December. Last year the company made 15 million profit. The company paid out hefty dividends to its shareholders. Workers at the Merseyside yard were furious that they had heard the news on the local radio. There was also anger at the inactivity of Tony Blair and New Labour.

Chris White, an engineer at Cammell Laird, said, “I want the government to step in-they have done it before for other companies, and they should do the same here to save jobs.”

Electrician Pete Smith said, “It is a disgrace that Labour has not stepped in straight away. I have always voted Labour, but not any more. This is as much as a crisis for us as foot and mouth is for the countryside. There should be the same scale of response from Labour.”

A day older and deeper in debt 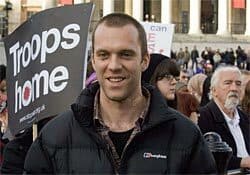