This article is over 18 years, 7 months old
OVER 150 representatives and activists from across Birmingham's Muslim community attended an emergency meeting on 4 January in Birmingham's central mosque.
Downloading PDF. Please wait...
Saturday 17 January 2004

OVER 150 representatives and activists from across Birmingham’s Muslim community attended an emergency meeting on 4 January in Birmingham’s central mosque.

The meeting was called in response to police harassment. One speaker described how he sustained over 50 injuries after a police raid on his home. Another speaker described the threat that legislation introduced under the guise of combating terrorism posed to civil liberties.

The police harassment Muslims are experiencing now is similar to what happened to the Irish community after the Birmingham pub bombings, another person said. But this time the attack is taking place after Muslims and non-Muslims together created the largest protest movement in British history.

The solidarity built in the anti-war movement provides the basis to build mass resistance to police terror. 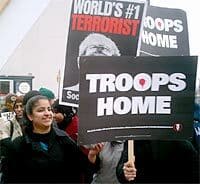