Unite Against Fascism (UAF) and Dudley trades council have called a counter-protest against the planned English Defence League (EDL) march in Dudley this Saturday, 3 April.

There are coaches booked from across the country, including Bolton, where the EDL last attempted to march but were outnumbered by a UAF counter-protest.

The EDL say they are protesting against the building of a mosque—which is no longer going ahead!

The regional council of Midlands NUT teachers’ union is the latest organisation to back the counter-protest.

The meeting, attended by reps across the region, voted unanimously to encourage all members to go to the protest.

The regional executive of the Midlands TUC also agreed to back the counter-protest and to issue a press statement condemning the EDL.

Jim Warner, the secretary of Dudley Trades Union Council (DTUC) told Socialist Worker, “We must stand shoulder to shoulder with those sections of our community who will feel intimidated by the arrival of the racist thugs in our town.”

“We had trade unionists, pensioners, students, Muslims and Sikhs side by side—all determined to defend our ­multicultural community.”

Activists have been leafleting mosques, temples, universities, colleges and local events across the region.

A delegation of UAF supporters went to the Tipton Muslim Committee Centre and the local Tipton mosque.

They told Socialist Worker, “We walked in the door and saw the flyers for the demonstration were already out. The person who let us in said, ‘we will be there, we know about it’.”

“The EDL have rioted in Birmingham and in Stoke and they tried to do it in Bolton. They want to spread racism and division.

“There is a general climate of Islamophobia in Britain thanks to politicians and the media. Muslims are the new scapegoats.

“The EDL claim they are only against ‘extreme Islam’ but that is rubbish—they think all Muslims are terrorists.

As with previous UAF protests against the EDL, some local councillors, the police and community leaders are trying to discourage people from protesting.

Some councils are using money made available from the government’s “Preventing Violent Extremism” budget to deter people from protesting.

“We have a right to defend our home town and the more people we have, the more peaceful it will be. If we have enough support the EDL will not get to run riot,” said Shaz.

“I can’t be in a position where I stay at home and let this happen. That’s why I’m joining the counter-protest.”

Jayne Sinden, a local teacher, says, “A group of us, including some FE students, have been out leafleting colleges in Stourbridge, Dudley, and Halesowen.

“We have had an overwhelmingly positive response.

“Many students have friends from different religions and ethnic backgrounds so they think the ideas of the EDL are crazy.

“The EDL are dangerous—they encourage racism and play into the hands of the British National Party (BNP).

“It is crucial that we don’t give our streets over to them—we have to make a stand now.”

Mirfat, an activist from Birmingham, has been on many of the protests against the EDL and is going to Dudley on Saturday.

“I remember when the EDL came to Birmingham—people were terrified.

“They spread fear across the city. We thought maybe it was a one-off, but they have grown.

“If we don’t stand up to them they will keep growing. We have to expose them as a racist organisation with Nazi supporters.”

National demonstration, 11am, Stafford Street, Dudley. To access the rally enter Dudley via Wellington Road leading to Southalls Lane. Drop-off point is Cross Street, Dudley DY1 1RN. Please note the change of location. The event will not be assembling in Market Place as previously advertised.

A coach sponsored by the PCS union leaves York Way (King’s Cross) at 6:30am. Tickets are free for PCS members, £15 for non-members and others and £7 concessions 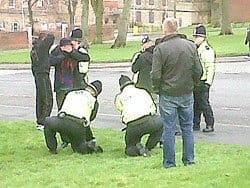