This article is over 17 years, 3 months old
Support Martin Gleeson The Greater Manchester Association of Trades Union Councils is to write to the chief constable of Greater Manchester Police to request that charges against an Oldham TUC official be dropped.
Downloading PDF. Please wait...
Saturday 19 March 2005

Martin Gleeson, the secretary of Oldham TUC, was arrested in Oldham on Holocaust Memorial Day, 27 January, following a complaint from a BNP activist that he had damaged a wreath belonging to the fascists.

Following his arrest, he was detained for seven hours and later charged with causing criminal damage to the BNP wreath to the value of £20.

“It is the view of this association that the presence of the BNP was designed to give offence and to cause outrage to people attending the event, including members of the Jewish community.”

A leaflet announcing the launch of the BNP’s general election campaign was pushed through the door of a Lancaster MP’s party office on Friday of last week. Within minutes Lancaster Unite Against Fascism had been notified.

We called the pub where the launch meeting was booked, told the landlord precisely what the BNP is, and said there would be a massive demonstration if the meeting was allowed to go ahead.

Within half an hour an e-mail had been sent out to supporters asking for urgent action. The pub was inundated with phone calls objecting to the meeting.

A couple of hours later we received our first response telling us that the pub had cancelled the meeting.

This was confirmed when we visited the pub to hand over some information about the BNP. Even small actions can get results. 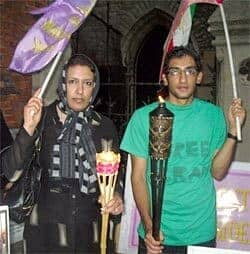