This article is over 13 years, 2 months old
The Stop the War Coalition has launched a campaign to defend demonstrators who were beaten or arrested during a peaceful protest at a visit by George Bush to London on 15 June.
By Simon Assaf
Downloading PDF. Please wait...
Tuesday 04 November 2008

The Stop the War Coalition has launched a campaign to defend demonstrators who were beaten or arrested during a peaceful protest at a visit by George Bush to London on 15 June.

At a press conference last week, march organisers accused the police of being “extremely violent” on the day.

They pointed out that some demonstrators were hospitalised and others are still receiving medical treatment.

Six of the demonstrators were arrested and charged with “violent disorder”. If found guilty they could face harsh prison sentences.

Speakers at the press conference described their experience on the demonstration.

Walter Wolfgang, a member of the Labour Party executive, said, “I thought we’d be allowed to march up Whitehall. Instead the police not only prevented us marching but had set up barricades across Whitehall which acted as a provocation.

“I was on the side of Whitehall closest to Portcullis House. On the other side I saw the police using undue violence. They used batons at an early stage though no one had used violence against them.

“The aggression was from the police. This was a change in police behaviour.”

Maureen Stephenson described how she is still receiving medical treatment after being pushed to the ground.

She said, “I went to Whitehall on my own and found myself at the front by the police cordon. I saw a man on the ground and when I moved towards him I was hit to the ground by a police officer.”

Police said that they feared the demonstration would be used by “terrorists” to attack the US president. This claim was dismissed by the Stop the War Coalition. A spokesperson said, “The last thing a terrorist would do would be to accompany a highly-policed demonstration which was constantly photographed and videoed.”

Millions of people have attended anti-war protests over the last seven years. Most of these have passed through Whitehall without any incident.

The Stop the War Coalition has described the prosecution of demonstrators on the June protest as a “sinister development”.

For more go to » www.stopwar.org.uk 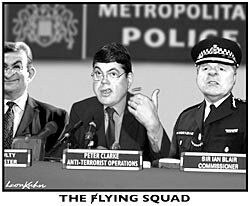